A five-minute screening test could cut the risk of developing bowel cancer by a third and save thousands of lives from what is the UK's second biggest cancer killer, according to new research led by Imperial College London, published on April 28th in the Lancet.

The new 16-year study, funded by the Medical Research Council, the National Institute for Health Research, and Cancer Research UK, showed that a single flexible sigmoidoscopy examination in men and women aged between 55 and 64 reduced the incidence of bowel cancer by a third, compared with a control group who had usual care. Screening with flexible sigmoidoscopy (named the 'Flexi-Scope test' by the research team) was particularly effective in the lower bowel, where it halved incidence of the disease.

A large waist can almost double your risk of premature death, says huge Europe-wide study Healthy lifestyle could prevent large proportion of cancers, says the landmark report. Over the course of the study, bowel cancer mortality was reduced by 43 percent in the group that had the Flexi-Scope test compared with the control group.

The randomised trial followed 170,432 people over an average period of 11 years, of whom 40,674 underwent a single Flexi-Scope exam.

Professor Wendy Atkin from the Department of Surgery and Cancer at Imperial College London, who led the research, said: "Our study shows for the first time that we could dramatically reduce the incidence of bowel cancer, and the number of people dying from the disease, by using this one-off test. No other bowel cancer screening technique has ever been shown to prevent the disease. Our results suggest that screening with Flexi-Scope could save thousands of lives."

The new results suggest that the Flexi-Scope procedure confers long-lasting protection from developing bowel cancer. In the UK, the Flexi-Scope exam is currently only available through a referral from a GP or specialist, for patients with symptoms.

The researchers behind the study suggest that in addition to saving lives, a screening programme using Flexi-Scope could also reduce the costs associated with treating people with bowel cancer. Research commissioned by the UK Department of Health, published in the journal Gut in 2006, suggested that if a screening programme based on this test was effective, this could save an average of £28 for every person screened.

Professor Max Parmar from the Medical Research Council, which part-funded the study, said: "Most people are unaware that bowel cancer is one of the biggest causes of cancer deaths - only lung cancer tops it. When an MRC-funded study like this generates unprecedented results, it shows the importance of long-term research into the biggest health challenges of the day and also showcases the need for people to volunteer for clinical trials. This result would never have been possible without the 170,000 men and women who entered this study and it's fantastic to have a greater proportion of men, who perhaps are not regarded as health conscious as women. As most of the NHS cancer screening tests are for women, flexi-scope presents an opportunity for men to enter screening programmes as well.

"This result would never have been possible without the 170,000 men and women who entered this study and it's fantastic to have a greater proportion of men, who traditionally don't look after their health as closely as women. As most of the NHS screening tests are for women, flexi-scope presents an opportunity to dramatically impact men's health too," added Professor Parmar.

Harpal Kumar, Cancer Research UK's chief executive, said: "This trial is the first to show the real benefit of flexible sigmoidoscopy in preventing bowel cancer by detecting and removing polyps before they can develop into a cancer. We have a tremendous opportunity to use this procedure to push bowel cancer back down the league table of cancer cases in the UK.

"Cancer Research UK is calling on the next Government to add the test to the existing national bowel screening programme as one of its first priorities. Such a programme, backed by all UK governments, would save thousands of lives and spare tens of thousands of families the anxiety and suffering associated with a cancer diagnosis, whilst also saving the NHS money," he added.

The current screening method for bowel cancer, called the faecal occult blood test, looks for traces of blood in stools and helps to detect cancer at an early stage. Routine screening using the faecal occult blood test is offered every two years for older people in England, Scotland and Wales, although the exact age groups that qualify for screening vary from country to country. This method of screening has been shown to reduce mortality from colorectal cancer by 25% in people who use the test, but it has not been shown to reduce the risk of developing cancer. 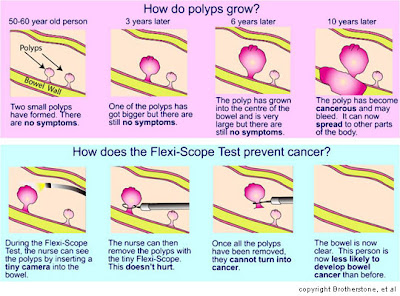 Information about bowel cancer symptoms can be found at www.cancerhelp.org.uk/type/bowel-cancer/about/bowel-cancer-symptoms
on April 28, 2010