A team of scientists has developed a solvent free process to deposit metal nanoparticles on carbon nanotubes, graphene and other nanocarbon allotropes. The process was previously thought impossible.
National Institute of Aerospace Associates (Hampton, VA) and NASA (Washington, DC) earned U.S. Patent 7,704,553 for its dry mix method of depositing nanometer-sized particles of metals onto nanocarbon allotropes. Carbon allotropes are structurally differentiated forms of the element carbon. Examples of acceptable carbon allotropes are: amorphous carbon, carbon nanofibers, carbon nanofoam, diamond, fullerene, graphite, exfoliated graphite, single-walled carbon nanotubes, multi-walled carbon nanotubes, double-walled carbon nanotubes, lonsdaleite and aggregated diamond nanorods.
Inventors Kent A. Watson, Michael J. Fallbach, Sayata Ghose, Joseph G. Smith,  Donavon M. Delozier and John W. Connell developed a facile, simple, synthetic method to deposit nanometer sized metallic particles onto substrates. In particular, the inventors found it  “especially surprising” that such a process could be successful without the use of solvents or reducing agents. In fact, the large body of work already performed by those knowledgeable in the state-of-the-art and conventional theory suggests that such a simple method as described and claimed would not result in metal particle deposition at all.
The inventors developed a process for depositing nanometer-sized metal particles onto a substrate in the absence of aqueous solvents, organic solvents, and reducing agents, and without any required pre-treatment of the substrate, includes preparing an admixture of a metal compound and a substrate by dry mixing a chosen amount of the metal compound with a chosen amount of the substrate; and supplying energy to the admixture in an amount sufficient to deposit zero valance metal particles onto the substrate.
This process gives rise to a number of deposited metallic particle sizes which may be controlled. The compositions prepared by this process are used to produce polymer composites by combining them with readily available commodity and engineering plastics. The polymer composites are used as coatings, or they are used to fabricate articles, such as free-standing films, fibers, fabrics, foams, molded and laminated articles, tubes, adhesives, and fiber reinforced articles. These articles are well-suited for many applications requiring thermal conductivity, electrical conductivity, antibacterial activity, catalytic activity, and combinations of the materials,
FIG. 1 is a high resolution scanning electron micrograph (HRSEM) of a composition  of multiwalled carbon nanotubes (MWNT, VGE-S16) obtained from the University of Kentucky (0.100 g) which were dry mixed with silver acetate (0.0155 g) using a mortar and pestle. The solid mixture was transferred to a glass vial and heated in a nitrogen oven at 300.degree. C. for 3 hours. The theoretical amount of silver after reduction is 0.010 g and thus in theory the sample contains 9% by weight silver. The sample was removed and characterized by high resolution scanning electron microscopy (HRSEM). See FIG. 1. The silver particles are uniformly distributed along the length of the MWNTs and are less than 100 nm in size. 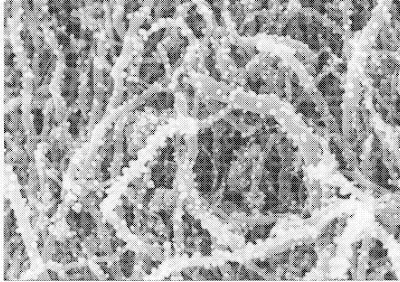 FIG. 2 is a high resolution scanning electron microscope (HRSEM) image of a composition of graphite and nanosilver.   Graphite (0.100 g, Grade 3775) obtained from Asbury Carbons, Inc. was dry mixed with silver acetate (0.0465 g) using a mortar and pestle. The solid mixture was transferred to a glass vial and heated in a nitrogen oven at 300.degree. C. for 3 hours. The theoretical amount of silver after reduction is 0.0300 g, and thus in theory the sample contains 23% by weight silver. The sample was removed and characterized by high resolution scanning electron microscopy. The silver particles are uniformly distributed along the surface of the graphite and are less than 100 nm in size. See FIG. 2 below. 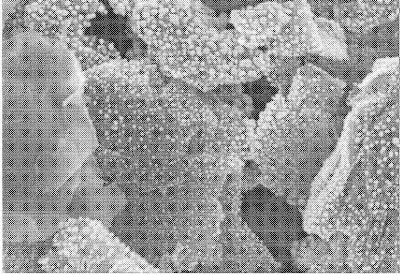 The polymer composites  may comprise other components, such as fillers, surfactants, organic binders, polymeric binders, crosslinking agents, coupling agents, anti-dripping agents, heat stabilizers, antioxidants, colorants, inks, dyes, or any combination of them.
Preferred metals which can be deposited as nanoparticles on nanocarbon allotropes are those listed in the periodic table as transition metals of Group VIIIA (Fe, Co, Ni, Ru, Rh, Pd, Os, Ir, and Pt), those of Group IB (Cu, Ag, and Au), those of Group IA (Li) and those of Group IIB (Zn, Cd, and Hg), including mixtures of the particles. The metals Pd, Pt, Ag, and Au are especially preferred. The metals can be in the form of a compound with another element or group. Preferable elements in the metal compound are halides, especially chloride. Preferable groups in the metal compound are organic nitrates and carboxylates, and especially acetate.
on April 27, 2010