National Science Foundation (NSF)-supported climate scientist Mark Flanner and colleagues find differences in the rates for spring warming and snow cover decline in Eurasia and North America, and are studying whether aerosols are a key factor.
Aerosols are tiny particles, such as soot or dust, suspended in Earth's atmosphere. In addition to their air-quality impacts, aerosols can interfere with sunlight reaching the planet's surface. Scientists often talk about aerosols in terms of their optical depth, which indicates how much incoming sunlight aerosols prevent from reaching the Earth's surface.
The Moderate Resolution Imaging Spectroradiometer (MODIS) flying on NASA's Terra and Aqua satellites can detect aerosols, and this image shows the annual mean aerosol optical depth for 2006, based on daily measurements made by MODIS. White represents little or no aerosol interference with sunlight, and dark orange indicates considerable interference. Areas where data could not be collected appear in gray. 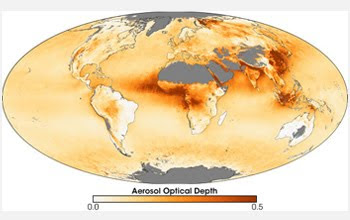 Over the past 30 years, springtime snow melt and warming appear to be proceeding at a faster rate in Eurasia than in North America.
Climate scientist Mark Flanner, an assistant professor at the University of Michigan and a recent Advanced Study Program graduate at the National Science Foundation's (NSF) National Center for Atmospheric Research (NCAR), led a study that investigated these changes, ultimately finding that spring warming rates and snow cover decline in Eurasia may be twice what they are in North America.
In the same study, Flanner and his colleagues also pointed out that only one of the climate scenarios generated by general circulation models in the Intergovernmental Panel on Climate Change's (IPCC) Fourth Assessment Report reflected this trend.
In fact, most IPCC model scenarios show the regions having similar springtime temperatures and snow-melt rates. Flanner and his collaborators suspect aerosols--particularly black carbon and mineral dust--might be responsible for the difference in modeled versus observed climate.
Eurasia produces high levels of both types of aerosols, which blow across the Eurasian land mass and affect the surface and nearby atmosphere in a variety of ways.
Some aerosols reflect incoming solar energy, potentially cooling underlying surfaces, but black carbon and mineral dust tend to warm snow-covered surfaces by absorbing incoming solar energy. Particulates that fall to the surface also reduce snow's reflective qualities, causing even more radiation to be absorbed.
In the Northern Hemisphere, springtime snow cover is unique because of its widespread distribution, and because intense incoming solar radiation during that season amplifies atmospheric aerosols' effects.
Because higher concentrations of organic matter, black carbon and dust are typical in the atmosphere and on the snow-covered surfaces in Eurasia, Flanner and his colleagues hypothesize that those aerosols might account for regional snow-cover differences. By including these aerosols in climate models, the researchers hypothesized that the models might more effectively match springtime observations.
Primary sources of industrial pollution include emissions from power plants, smelters and refineries, which pour oxides of sulfur and nitrogen, and other gasses, into the atmosphere. There, the oxides and gasses react with moist air to become sulfuric and nitric acids, resulting in the formation of acid rain. In addition, in the presence of sunlight, nitrogen dioxide reacts with hydrocarbons (mostly gasoline vapors that escape burning in automobile engines) and other gases to form ozone, the primary ingredient of the photochemical fog that covers many large cities. Scientists at the National Center for Atmospheric Research are tracing the complex chain of events linking emissions and airborne pollutants. 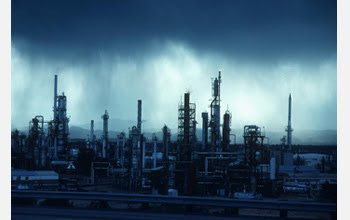 To test their hypothesis, the team first ran a number of modeling scenarios to see if the inconsistency might relate to ocean-based effects. If oceans proved to have a leading role, the aerosol hypothesis would likely be incorrect. However, after constraining the oceans' effects, the models continued under-predicting land-surface temperature trends. The findings indicated that a land effect likely accounts for the discrepancy between observations and models showing warming and melting trends.
Having eliminated ocean effects, the researchers enhanced the models with snow-darkening characteristics, mimicking the impact of dark materials deposited on top of pristine snow. With this adjustment, the models correctly indicated increased springtime warming in Eurasia.
Next, the researchers incorporated human-produced carbon dioxide (CO2) into the models. The scientists found that over North America, CO2 had more of an impact on springtime snow cover than black carbon and organic matter, but in Eurasia, as hypothesized, the particulates were far more influential, having nearly as much of an effect as CO2.
"While this research does not fully explain why springtime land temperatures and snow cover are changing so much faster over Eurasia than North America, it does suggest that snow darkening from black carbon, a process lacking in most climate models, is playing a role," Flanner said.
Ultimately, Flanner continues, the magnitude of Earth's climate response to CO2 and other human-generated products depends on feedbacks. Changes in snow cover amplify initial climate changes and constitute one of the most powerful feedbacks. Because snow covers much of the Northern Hemisphere during spring, Flanner and his colleagues expect to see some of the strongest climate change signals in northerly regions during local spring.
Sources and contacts:
Rachel Hauser,
National Center for Atmospheric Research
rhauser@ucar.edu
on April 30, 2010