Rensselaer Polytechnic Institute Professor Nikhil Koratkar is leading a $1 million study to develop new coatings for nanosensors that could lead to more accurate and efficient oil exploration.
Koratkar and colleagues are investigating how the flow of water, steam, or certain gasses over surfaces coated with carbon nanotubes or graphene can generate small amounts of electricity. The researchers seek to explain this phenomenon — which has been observed but is not yet fully understood — and use their findings to create tiny self-powered devices that travel through naturally occurring cracks deep in the earth and can help uncover hidden pockets of oil and natural gas.
“Water and gases are naturally moving deep within crevices in the earth, so we are investigating the best way to harvest that energy and put it to use,” said Koratkar, professor in the Department of Mechanical, Aerospace, and Nuclear Engineering in Rensselaer’s School of Engineering. “It has been shown that the flow of water and gases over certain nanomaterials creates an electric charge, but we’re still not quite sure why. Once we fully understand the reason, we should be able to optimize the process and create a practical, useful device.”
The three-year study, funded by the Advanced Energy Consortium, is titled “Nanofluidic Power Generation Using One-Dimensional (Carbon Nanotube) and Two-Dimensional (Graphene) Nanomaterials.”
Hydrocarbon exploration is an expensive process that involves drilling deep down in the earth to detect the presence of oil or natural gas. Koratkar said oil and gas companies would like to augment this process by sending out large numbers of nanoscale sensors into new and existing drill wells. These sensors would travel laterally through the earth, carried by the naturally occurring water and gas flowing through the network of cracks that exists underneath the earth’s surface. Oil companies would no longer be limited to vertical exploration, and the data collected from the sensors would arm these firms with more information for deciding the best locations to drill.
A key challenge to realizing these nanosensors, Koratkar said, is that they are autonomous and therefore need to be self-powered. Recent studies show that the motion of water over carbon nanotubes creates small amounts of electricity—but far less than needed to power the sensors. Koratkar’s team is investigating how to optimize this process and exploit it to generate electricity on the order of milliwatts. In addition to coating a nanosensor with carbon nanotubes, the team will also look at using coatings made from graphene, a single-atom-thick sheet of carbon atoms arranged like a nanoscale chain-link fence.
Conventional thinking is that free electrons on the surface of carbon nanotubes and graphene can interact with ions in the flowing water. The ions can drag the electrons in the flow direction, creating an electric current. It is curious, Koratkar said, that flowing steam over carbon nanotubes creates a voltage, even though steam does not contain ions—a mystery the new study plans to tackle. Additionally, his team will investigate how water flowing inside of carbon nanotubes, and inside of layered graphene, can be harnessed to create additional voltage.
“We don’t fully understand everything about this process, but once we do, it should lead to exciting new possibilities for nanocoatings that can power sensors by harvesting energy from their environment,” Koratkar said. “This should help the drilling companies locate and identify new pockets of oil and natural gas that have so far gone unnoticed.”
Rensselaer will receive $700,000 of the grant, and $300,000 will go to researchers at Rice University. Koratkar’s co-investigators are Yunfeng Shi, assistant professor in the Department of Materials Science and Engineering at Rensselaer; and Pulickel Ajayan, the Benjamin M. and Mary Greenwood Anderson Professor of Engineering at Rice 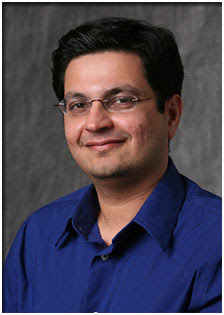