Nexeon Ltd. (Oxford, GB) earned U.S. Patent 7,683,359 for its silicon/lithium battery which can be fabricated on a substrate via lithography. This allows the battery to be produced as an integrated unit on a chip. The battery includes an anode formed from an array of submicron structures including silicon fabricated on a substrate and a cathode including lithium, according to inventor Mino Green.
Silicon is recognized as a potentially high energy per unit volume host material for lithium in lithium battery applications.
To realize the potential of the silicon-lithium system to allow the possibility of a lithium battery integrated on to a silicon chip, the Nexeon invention provides a method of fabricating sub-micron silicon electrode structures on a silicon wafer. Preferably these structures comprise nano-pillars.
For a silicon-lithium system the basic cell diagram can be represented as Li|Li+-electrolyte|Si, for this cell the cathodic process is, discharge of lithium onto silicon to form an alloy (charging), and the anodic process is lithium extraction or de-alloying (discharging).
It will be appreciated that the formation of Li12Si7 in place of Si results in a significant volume change (the alloy is 2.17 times bigger). On a conventional silicon wafer suitable for use as an anode for a lithium battery this volume change leads to crack formation and pulverization however due to their small size and configuration sub-micron anode structures are be able to tolerate the conditions occasioned by the massive volume changes occasioned by lithium alloying/de-alloying.
Of course the structures may also be fabricated by other known techniques, such as photolithography, which produce regular arrays of features rather than the scattered distribution produced by island lithography.
FIG. 1 is a schematic view of a structured electrode, in accordance with the invention and as used in the following tests, it shows a part sectional view of the anode in which the pillars can clearly be seen on the silicon wafer 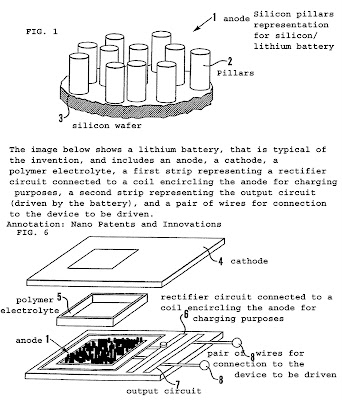 FIG. 6 shows a lithium battery, comprising a typical embodiment of the Nexeon battery on a chip, and includes an anode, a cathode, a polymer electrolyte, a first strip representing a rectifier circuit connected to a coil encircling the anode for charging purposes, a second strip representing the output circuit (driven by the battery), and a pair of wires for connection to the device to be driven.

In tests structured electrodes of sub micron diameter Si pillars maintained their structural integrity throughout the cycling whereas planar Si electrodes showed cracks (2 micron features) after 50 cycles. An appropriate size restriction to achieve suitable electrodes is that the silicon pillars should not exceed a fractional surface coverage (F) of about 0.5.
FIG. 4 shows the structure of the K-series of silicon electrodes that were used in this study and the effects of extensive galvanostatic cycling upon that structure. The structure are clearly intact, but at the higher current density slight cracking of the bulk Si surface, below the pillars, is observed.

To make structures in accordance with the invention the following method may be used, namely "Island Lithography" as disclosed in international patent No. WO01/13414. This method employs cesium chloride as the resist in the lithographic step in the fabrication of pillar arrays. It works as follows. A thin film of CsCl is vacuum deposited on the clean, hydrophilic, surface of the Si substrate. This system is then exposed to the atmosphere at a controlled relative humidity.
A multilayer of water absorbs on the surface, the CsCl is soluble in the water layer (being more soluble at places of higher radius of curvature). The CsCl re-organises into a distribution of hemispherical islands, driven by the excess surface energy associated with CsCl surface curvature. Such arrays are useful in making structures for various studies involving nano-scale phenomena. In this case reactive ion etching is preferably used, with the islands acting as X masks so that removal of the surrounding silicon forms the desired pillar structures.
FIG. 5 shows the SEM pictures of the structures obtained on planar (un-pillared) Si electrodes before cycling and, separately, after galvanostatic cycling. When cycled at the lower current densities, the surface is deformed, though crack formation does not occur. Cycling at higher current densities produces wide cracks.. 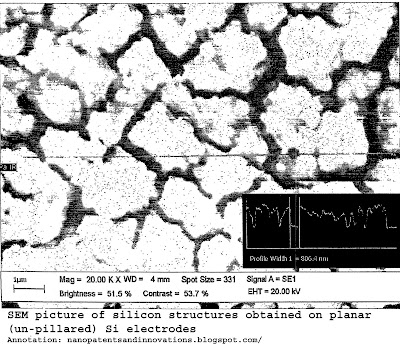