Photo: Archaeologists in the Denisova Cave in August 2005. This is where the tiny fragment of finger bone was discovered. 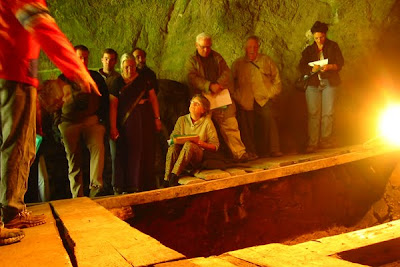 The first group of hominins to leave Africa some 1.9 million years ago was Homo erectus. Archaeological finds and genetic data indicate that at least two other groups left Africa at a later date: first, around 500,000 to 300,000 years ago, the ancestors of the Neanderthals migrated. Then, about 50,000 years ago, it was the turn of the forefathers of anatomically modern humans. Direct descendants of Homo erectus may have survived in Indonesia until less than 100,000 years ago. Older representatives of Homo erectus and Homo heidelbergensis also lived in more northerly climes, for instance in the Altai Mountains in southern Siberia more than 125,000 years ago. Neanderthals also lived in Siberia at that time.

A detailed analysis of the mitochondrial genetic material showed that this hominin shared a descendant with modern humans and with Neanderthals about 1.0 million years ago. This common descendant is about twice as old as the shared descendant of anatomically modern humans and Neanderthals, as determined on the basis of their mitochondrial DNA. Furthermore, the age of the fossil indicates that this unknown form of human could have co-existed with Neanderthals and modern humans in southern Siberia.
Original work:
Johannes Krause, Qiaomei Fu, Jeffrey M. Good, Bence Viola, Michael V. Shunkov, Anatoli P. Derevianko & Svante Pääbo, "The complete mitochondrial DNA genome of an unknown hominin from southern Siberia."
Nature, 24 March 2010, DOI: 10.1038/nature08976
on March 30, 2010