Making Fuel From Air: Three British Universities Team to Develop Nanomaterials to Capture CO2 and Transform It to Fuel and Plastics

Funding of $2.08 million (£1.4 million) to develop porous nanomaterials that absorb CO2 and convert it into new products such as car fuel and plastics has been awarded to three universities in the South West of Britain.  The research, led by the University of Bath, will also involve scientists and engineers from the Universities of Bristol and the West of England
The researchers will be developing Metal Organic Frameworks (MOF) which can store gases like CO2 and use catalysts to convert them into fuel or plastics. 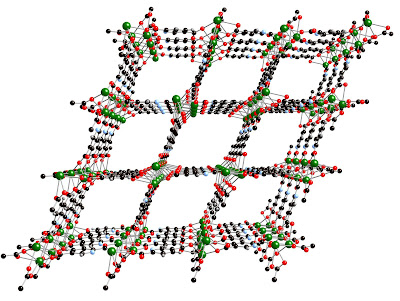 Image credit: University of Bath
The researchers hope the porous materials will be used to line factory chimneys to take carbon dioxide pollutants from the air, reducing the effects of climate change. The process will be powered by renewable solar energy.
Dr. David Fermin, from the University of Bristol, said: "Currently, there are no large-scale technologies available for capturing and processing CO2 from air. The fact is that CO2 is rather diluted in the atmosphere and its chemical reactivity is very low. By combining clever material design with heterogeneous catalysis, electrocatalysis and biocatalysis, we aim to develop an effective carbon neutral technology."
The Bath-Bristol collaboration brings together scientists from a range of disciplines, including researchers from Bath’s Institute for Sustainable Energy & the Environment (I-SEE), the School of Chemistry at the University of Bristol, and the Bristol Robotics Laboratory (BRL) and School of Life Sciences at the University of the West of England.
Dr Ioannis Ieropoulos, Bristol Robotics Laboratory, added: “One of the great advantages of this project is that it will attempt to exploit the natural abilities of photo-heterotrophic microorganisms in utilising light to fix CO2, which in turn will allow the production of biomass to be used as fuel and electricity or hydrogen, as required.”
Dr Frank Marken, Senior Lecturer in Chemistry at Bath, said: “Dr Frank Marken, Senior Lecturer in Chemistry at Bath, said: “Current processes rely on using separate technology to capture and utilize the CO2, which makes the process very inefficient.  By combining the processes the efficiency can be improved and the energy required to drive the CO2 reduction is minimized. It will be a massive challenge but we have a strong inter-disciplinary team that includes chemists, chemical engineers, biologists, and life-cycle analysts.”
Dr Petra Cameron, RCUK Fellow from the Department of Chemistry at Bath, said: "We hope that the use of renewable energy to recycle CO2 will be an effective way to reduce the amount of CO2 in the atmosphere.”
The project, funded by the Engineering & Physical Sciences Research Council (EPSRC) to the tune of £1.4 million, is in its early stages, but the researchers predict the new technology could make a real difference in the fight against climate change.
For other stories on fuel from air see: Carbon Capture Offers Permanent Inexhaustible Supply of Fuels That Will Eliminate the Carbon Footprint of Human Activities http://nanopatentsandinnovations.blogspot.com/2010/03/carbon-capture-offers-permanent.html
Iceland, the Next Saudi Arabia? Nobel Prize Winner Develops Process to Produce Fuel and Plastics Solely from Water and Carbon Dioxide from Geothermal Sources Using Nanomaterials http://nanopatentsandinnovations.blogspot.com/2010/01/nanotechnology-and-geothermal-energy.html
on March 27, 2010