Synchrotron-based x-ray diffraction techniques have become largely automated, yet researchers must still travel from all over the world to Brookhaven’s National Synchrotron Light Source (NSLS) simply to load their samples and program a few computer parameters before the system takes over.
IBM researcher Jean Jordan-Sweet loads a silicon wafer sample into the diffractometer at the NSLS beamline X20A for her colleagues performing a remote access experiment. 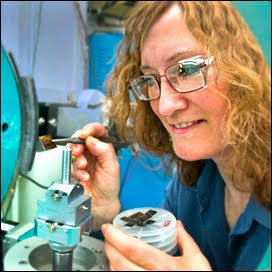 Image credit: BNL
“We would like to figure out ways to offer more flexibility for researchers using the NSLS,” said Kathy Nasta, the NSLS user administration office manager. “We are trying to learn how to use the system we have in place to build a remote access program.”
IBM Researcher Jean Jordan-Sweet had plenty of reasons to volunteer one of IBM’s beamlines, X20A, for pioneering remote access protocols.
“IBM has multiple worksites statewide and numerous U.S. and international partner alliances,” said Jordan-Sweet. “Remote access can help our researchers who can’t get here or who are really busy and have other work they need to do during the hours that data are automatically collected.”
IBM’s researchers use the x-ray beamline to investigate how different nanomaterials “behave” after exposure to thermal treatments that mimic the microelectronics manufacturing process. The technique allows researchers to determine the best combination of materials and processes to use when advancing, and shrinking, new technologies.
Two of Jordan-Sweet’s colleagues, Bin Yang, a technical staff member at IBM’s alliance partner, GlobalFoundries, and his collaborator at IBM, Christian Lavoie, eagerly volunteered their beam time for a remote access attempt. 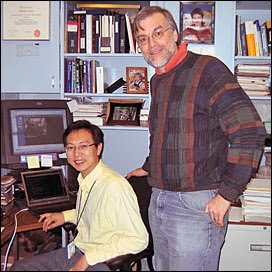 Image credit: BNL
“Our studies are pushing the physical limits of nanomaterials since technological devices are becoming so small,” said Yang. “We need synchrotron sources to study thin silicide films in order to understand processes better and to make better computer chips, but the commute to use this resource can be difficult. My drive is only two hours from Westchester County, New York, but other researchers come from all over the world.”
For Jordan-Sweet, getting the necessary software for remote access was as simple as downloading and configuring free online programs called PuTTY and NX Client. She received software guidance from NSLS Controls Computing Leader Zhijian Yin.
After Brookhaven’s Information Technology Division provided the team with a gateway server for secure access to the BNL network and Jordan-Sweet relayed a quick software tutorial to Yang and Lavoie, they were ready for testing.
For the first test experiment, they chose a relatively simple study that involved collecting texture data, or pole figures, for a thin, nickel silicide film.
“We mailed our samples to Jean and she did the initial setup,” said Yang. “Then we were able to use a webcam to see the machine and remotely take over the computer.”
Yang controlled the diffractometer, which collects the pole figure measurements, by logging into a remote desktop through the free software programs and positioned the machine to his precise specifications using a standard synchrotron beamline control program called SPEC Connect. Yang visually monitored the machine’s movements via a webcam to avoid colliding diffractometer components together as he changed the x-ray detector’s angle and the sample’s orientation within the diffractometer.
Yang and Lavoie successfully collected their data while comfortably seated in an office at the IBM T.J. Watson Research Center at Yorktown Heights, New York. They later used these data to construct 2-D orientation maps of the nickel silicide crystal grains, which had been formed using temperatures near 500 degrees Celsius. The maps give data that indicate whether these materials form good contacts after withstanding the temperatures used during manufacturing processes.
“The remote access was great for us on our end,” said Yang. “But at this point, Jean needs to do the initial sample alignment. Hopefully, in the future, she won’t need to do anything and a robotic arm can take over the job.”
“For now, I’m the robot,” said Jordan-Sweet, noting that robotic sample-loading technology is already available at IBM and is slated for installation on an endstation being planned for NSLS-II.
Jordan-Sweet expects to streamline the remote access process at X20A before expanding the technology to the other beamlines that have more complex capabilities such as time and temperature diffraction, and eventually to the NSLS-II.
Yang already has additional remote access experiments planned with Jordan-Sweet in April using an additional time-saving device — a linear detector that takes multiple pole figure measurements at once.
“The remote access will benefit us even more with our upcoming experiments because they are very time consuming,” said Yang. “One measurement, in particular, will take up to 48 hours.”
Jordan-Sweet also plans to introduce her Belgian colleagues at the University of Ghent to remote access during their scheduled visit to Brookhaven in April.
“I think they will be keen on the remote access too,” said Jordan-Sweet. “They will save a lot of time and money on travelling if they use it.”
The NSLS User Office is using Jordan-Sweet’s remote access attempts to help figure out the best way to build a program to meet the remote user population’s unique needs.
“Other groups have dabbled with remote access at the NSLS, but Jean’s experiment was the first time that we set out to build a formal remote access program,” said Nasta.
“We hope that building a remote access program will attract new users to the NSLS by lowering the overhead for them to use the facilities,” said NSLS Chair Chi-Chang Kao. “Moreover, we believe this effort will lead to more efficient use of the NSLS and promote new types of collaborations.”
on March 30, 2010