First Image from a Mars Rover Choosing a Target 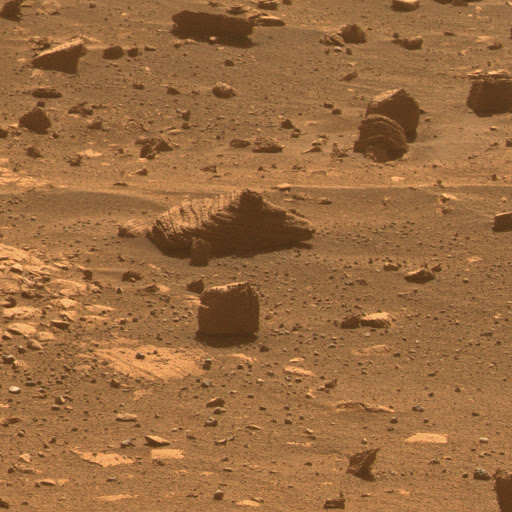 This view results from the first observation of a target selected autonomously by a spacecraft on Mars. During the 2,172nd Martian day, or sol, of its mission on Mars (March 4, 2010), NASA's Mars Exploration Rover Opportunity used newly developed and uploaded software to choose a target from a wider-angle image and point its panoramic camera (Pancam) to observe the chosen target through 13 different filters. The imaging was part of a checkout of the new software, named Autonomous Exploration for Gathering Increased Science, or AEGIS. Images taken through three of the filters are combined into this approximately true-color view of the rock, which is about the size of a football.

The component images are one-quarter subframe field of view, taken with the left camera of the stereo Pancam through filters admitting wavelengths of 600 nanometers, 530 nanometers and 480 nanometers.

The rock in the target is close to a young crater called "Concepcion" and might have been thrown outward by the impact that excavated the crater. The wider-angle image that Opportunity analyzed to select this target was taken by the rover's navigation camera and is at http://photojournal.jpl.edu/catalog/12973.
on March 26, 2010