3M Innovative Properties Company (Saint Paul, MN) received U.S. Patent 7,687,100 for a  simple and inexpensive method of making a fuel cell flow field plates that exhibit increased durability under conditions of use.
According to inventor Mark K Debe (Stillwater, MN) the manufacturing method includes the steps of applying a dry carbon powder to a flow field surface of the flow field plate and buffing the carbon powder onto the flow field surface. In some embodiments, the method includes the steps of rubbing a flow field surface of the flow field plate with a dry carbon solid and optionally buffing the carbon onto the flow field surface.
The dry carbon powder is selected from the group consisting of graphite powder, amorphous carbon powder, carbon black powder, carbon nanotubes, fullerenes, soot and combinations of the materials.  The amount of dry carbon powder can range in weight from 5% to less than 1%, and is typically less than 1% by weight. The dry carbon powder is typically 10 microns or less is size but may be as large as 1,000 microns.
Several full sized plates of a fuel cell stack were coated with dry graphite layer using the procedure developed by 3M. Both sides of each plate were coated. Other plates were left uncoated. The plates were then assembled into a fuel cell stack. The stack was then operated at a constant current density of 0.72 A/cm.sup.2 at 80.degree. C. under reformate/air (1.5/2.0 stoich) for .about.350 hours. The plate-to-plate contact resistance induced voltage drop was monitored periodically during the test for all the cell interfaces and found to be changing very slowly for all at a very small rate of <0.16 mV/hour, with the graphitic coated interfaces showing the lowest rate of 0.091 mV/hour. The stack temperature was then increased to 90.degree. C. for an additional 350 hours, and the rate of voltage increase was on average of 0.15 to 0.28 mV/hr for all the cell types, with the graphitic coating at the highest value.

The stack was then disassembled and the plates inspected for evidence of corrosion. The visual appearance of the plates was immediately seen to be very different. The graphite coated plates remained essentially unchanged in appearance, whereas the untreated control plates exhibited bluish and reddish iron oxide deposits.
FIGS. 5 and 6 are photographs of the resulting untreated (comparative) plates (on the left) and graphitized plates (on the right) demonstrating that the graphite treatment appears to have prevented the corrosion on both the coolant side and the reactant sides of the stainless steel plates. 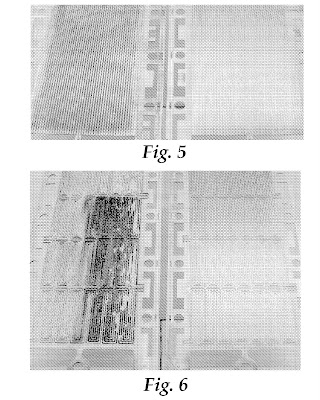