Soldiers and first responders may soon have a better way to evaluate the interior of dangerous structures, thanks to a joint project between Missouri University of Science and Technology and the University of Missouri-Columbia. 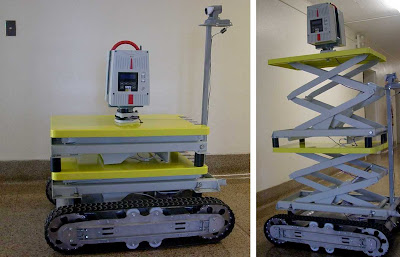 As part of the project, which began in 2008, students at Missouri S&T have built a remote-controlled robot that is equipped with an infrared camera and LIDAR (light detection and ranging) technology. Like radar, LIDAR sends out signals, in this case millions of laser points, to bounce off objects and provide feedback. The LIDAR-equipped robot then wirelessly relays detailed images to a laptop computer.

"We can get a 3-D map of rooms by sending the robot inside or having it look through a window," says Dr. Norbert Maerz, associate professor of geological engineering at Missouri S&T. "Even when you can't see through windows, you can still scan through them with LIDAR. Using this information, soldiers or first responders could evaluate safety issues and determine strategies."

Maerz and his students have used their prototype to map the inside of houses, businesses, Missouri S&T buildings, chambers in S&T's Experimental Mine and cave passages in the Mark Twain National Forest. 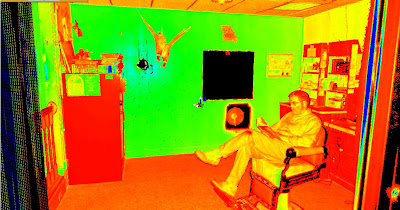 "In theory, you could deploy this technology inside caves where terrorists might be hiding," Maerz says.

Maerz sends sample images to Duan in Columbia for advanced data analysis and 3-D reconstruction. The technology is capable of revealing detailed information regarding floorplans, for instance, but it can also "see" people and objects inside a space
"Once you have the images, you can zoom in on objects and look at things from different angles," Maerz says. "You can make precise measurements of any object and assess dimensions."

The technology is further capable of detecting structural damage like cracks in beams, which would allow engineers to make safety recommendations following natural disasters. "This could definitely be used in disaster relief situations," Maerz says. "The main idea is to assess safety in dangerous areas."

The student-built robot at S&T resembles the rovers NASA has sent to Mars. But the S&T prototype, which weighs approximately 200 pounds, only cost about $25,000 to assemble. Maerz envisions commercial models being smaller, lighter and more flexible. 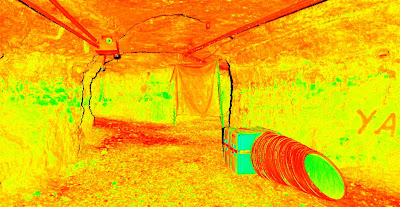