Bloom Energy Corporation (Sunnyvale, CA) has developed a solid oxide regenerative or reversible fuel cell  (SORFC) system which can be used to supply power in a fuel cell mode and to generate metabolic oxygen and a hydrocarbon fuel reserve in an electrolysis mode. The system may also be used as a secondary power source or for energy peak shaving applications, according to inventors K. R. Sridhar, Matthias Gottmann,  James Frederick  McElroy and Fred Mitlitsky in U.S. Patent 7,572,530.  Bloom Energy is the assignee in 16 U.S. Patents and has 53 patents pending.
The SORFC system uses non-noble metal electrode compositions. The SORFC system is used for peak shaving. The SORFC system may be located in a closed environment, such as a mining tunnel, airplane, or underwater vehicle, or in an open environment, such as a building.

In peak shaving, power is provided to the SORFC from an external power source when power demand on the external power source is below a predetermined amount. At this time, the SORFC is operated in an electrolysis mode using the power provided from the external power source. The SORFC generates hydrocarbon fuel, such as methane, when the SORFC operates in the electrolysis mode. The generated fuel is stored in a fuel storage vessel.
The solid oxide regenerative fuel cell operates in the electrolysis mode and can provide oxygen to the life support system when the building is sealed from outside atmosphere. For example, the building or a portion thereof may be sealed from outside atmosphere in case of an industrial accident or a deliberate act which releases harmful chemical or biological agents into the atmosphere. Alternatively, a portion of the building may comprise a clean room which is permanently sealed from outside atmosphere, such as in a semiconductor plant.
The solid oxide regenerative fuel cell provides power to the building in a fuel cell mode. The solid oxide regenerative fuel cell also provides waste heat in the fuel cell and electrolysis modes for at least one building appliance, such as an air conditioning system, a hot water heater, a refrigeration system or a cooking appliance located in the building.
If the portion of the building is permanently sealed, such as a clean room in a semiconductor plant, then the building may optionally contain two separate solid oxide regenerative fuel cell systems which continuously supply power and oxygen to the building. One fuel cell may operate in the electrolysis mode to provide oxygen to the building life support system and fuel to the second fuel cell. The second fuel cell may operate in the fuel cell mode to provide power to the building and/or to the first fuel cell using atmospheric oxygen and the fuel generated by the first fuel cell.
Alternatively, each fuel cell may use its own fuel supply and the operating modes of the two fuel cells are periodically switched to keep one fuel cell running in electrolysis mode and the other fuel cell in the fuel cell mode and visa versa.
In U.S. Patent Application 20090068055, Bloom Energy inventors Sudhakara Sarma Sreedhara and Ranganathan Sundaresan reveal a process for making a ready-to-press powder blend of the alloy Cr--Fe--Ni--Ti-nanoY2O3
A powder metallurgy method of making a chromium base alloy includes blending a first powder comprising a chromium powder and a second powder comprising at least one of titanium, titanium hydride, zirconium or zirconium hydride, annealing the first powder and the second powder in a reducing atmosphere after the step of mixing, compacting a blend of the first and the second powders, and sintering the compacted blend to form a chromium base alloy. The chromium alloy may be used as an interconnect for a solid oxide fuel cell, and includes least one of iron or nickel greater than zero and equal to or less than 7 weight percent, yttria greater than zero and equal to or less than 2 weight percent, at least one of titanium or zirconium greater than zero and equal to or less than 1 weight percent and at least 90 weight percent chromium.
FIG. 1 is a micrograph of the morphology of a ready-to-press powder blend of the alloy Cr--Fe--Ni--Ti-nanoY2O3 made. The bimodal distribution of the chromium powder is visible in the figure. 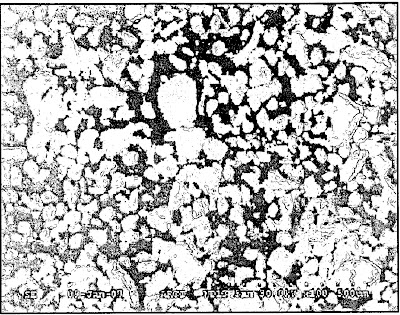 FIG. 3 is a micrograph which shows the nano yttria powder used in the powder blend. Chromium powder is blended with nanosized yttria powder in the Bloom fuel cell. Nanosized yttria includes yttria powder having an average particle size or diameter of less than 1 micron, such as 5 to 100 nanometers (nm), for example 10 to 30 nm. The scanning electron micrograph shows yttria of size in the nanometer size range. The average particle/crystallite size was verified as about 23 nanometer by measurement of the FWHM (full width at half maximum) width of x-ray diffracted peaks following standard practice. 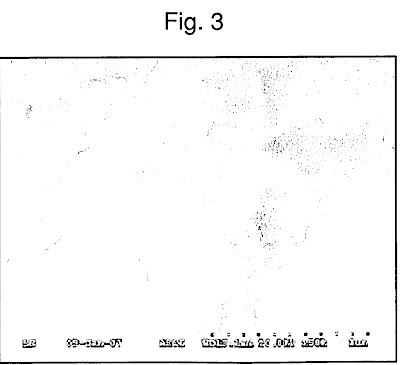 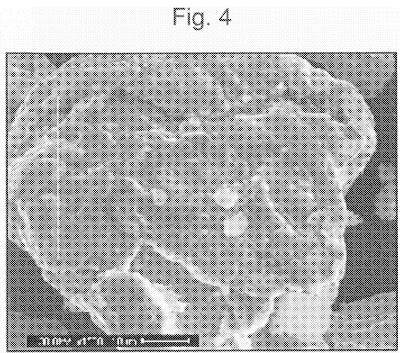 FIG. 5(a) shows a scanning electron micrograph of blended powder containing nano Y2O3 while FIG. 5(b) shows an EDS pattern for Y in the scan showing uniform distribution of Y2O3.

The embedded particles were identified as nickel, Y2O3, and iron by EDAX on the selected spots following standard practice. The uniformity of Y2O3 distribution in the overall blend was evaluated by EDS analysis of the powder in a scanning electron microscope. The distribution of the element Y on the total area of powders shown in FIG. 5(a) was seen to be extremely uniform in FIG. 5(b). Such uniformity in the blend is a major advantage since the small percentage of Y2O3 added would cover a large surface area of chromium powders without using mechanical alloying. Such distribution can be achieved in a blend containing coarser (larger than micron) sized powders by using additional mechanical alloying steps which increase process cost and complexity.

The yttria enhanced the high temperature strength and the oxidation resistance of the alloy. The adhesion between scale and alloy is markedly improved and this increases the alloy's resistance to thermal cycling exposure. Furthermore, the actual growth rate of the oxide can also be reduced. Such nano sized oxide particles also provide preferential nucleation sites for oxidation of chromium and reduce oxide growth rate. In addition, the yttria also modifies the chromium oxide layer microstructure, and hence modifies diffusion rates and stresses in the oxide layer.
on February 25, 2010