FIG. 2 is a scanned SEM image of an electrochemically co-deposited copper/SWNT nanocomposite SWNTs  can be seen to be covered uniformly by copper that forms the continuous phase. The SWNTs can be seen to be somewhat aligned in the Cu matrix. The uniformity in coverage with stiff and conductive copper better utilizes the properties of the SWNTs, as compared to conventional carbon nanotube polymer composites. 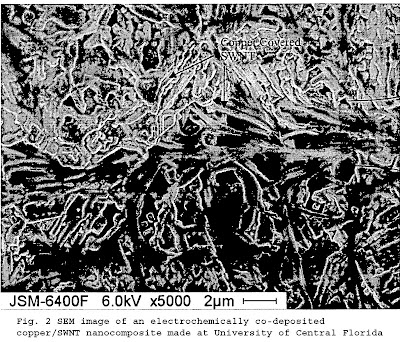 Carbon nanotube reinforced metal nanocomposites provide thermal conductivity and electrical conductivity which are generally significantly higher than the pure metal continuous phase material, mechanical strength is 2 to 3 times greater than that of the pure metal, and a tailorable coefficient of thermal expansion (CTE) is obtainable through changing the percentage of nanotubes in the nanocomposite. The material can be designed to match the CTE for a variety of materials of interest, including most semiconductors and electrically insulating (dielectric) substrates.

The carbon nanotube reinforced metal nanocomposites are preferably formed using an electrochemical co-deposition process in which both the nanotubes and the metal ions to be electrodeposited are in an electrolyte comprising solution. This process advantageously can be performed at or near room temperature, such as less than or equal to about 50.degree. C., and is thus compatible with a wide variety of processes and associated materials. The process is capable of being scaled for large area substrates and deposition on multiple substrates simultaneously. 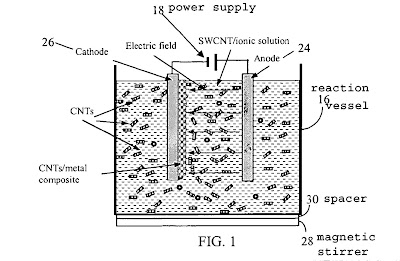