An innovative cardiac scanner will dramatically improve the process of diagnosing heart conditions. 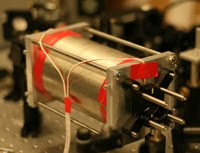 The portable magnetometer* is being developed at the University of Leeds, with funding from the Engineering and Physical Sciences Research Council (EPSRC).

Due to its unprecedented sensitivity to magnetic fluctuations the device will be able to detect a number of conditions, including heart problems in foetuses, earlier than currently available diagnostic techniques such as ultrasound, ECG (electrocardiogram) and existing cardiac magnetometers. It will also be smaller, simpler to operate, able to gather more information and significantly cheaper than other devices currently available.

Another key benefit is that, for the first time, skilled nurses as well as doctors will be able to carry out heart scans, helping to relieve pressure on hospital waiting lists. The device will also function through clothes, cutting the time needed to perform scans and removing the need for patients to undress for an examination. It could also be taken out to a patient's home, leading to a reduction in the use of hospital facilities.

Large scale magnetometers have been used for some time for things like directional drilling for oil and gas, on spacecraft for planet exploration and to detect archaeological sites and locate other buried or submerged objects. What has prevented them being used for identifying heart conditions is their size and high cost along with the specialist skill needed to operate them. Using them to examine a patient would involve containing the person within a magnetic shield to cut out other electrical interference.

"The new system gets round previous difficulties by putting the actual detector in its own magnetic shield," said Professor Ben Varcoe who is leading the research team.

"The sensor placed over the area being examined lives outside the shielded area and transmits signals into the detector. The sensor head is made up of a series of coils that cancel out unwanted signals and amplifies the signals that are needed. So the tiny magnetic fields produced by a person's heart can be transmitted into the heavily shielded environment. What we've been able to do is combine existing technology from the areas of atomic physics and medical physics in a completely unique way."

Like all parts of the body, the heart produces its own distinctive magnetic 'signature'. The research team has demonstrated that their magnetometer – developed as part of their work in the area of quantum physics – can reveal tiny variations in that signature. Studying these variations can, in turn, reveal the presence of a cardiac condition. The team is now working on miniaturising the magnetometer for widespread medical use. The device could be ready for use in routine diagnosis in around three years.

The device is expected to be particularly effective at detecting ischaemia, a condition where blood supply to an area of the body becomes inadequate due to a blockage of the blood vessels. It could also shorten surgical procedures for people suffering from arrhythmia – a very common condition where the patient has an irregular heartbeat. Currently, the condition is corrected by surgery which can last several hours. Much of the time is spent trying to identify which heart node needs to be cauterised. Scanning the heart with the new device during the operation would offer a much quicker way of pinpointing the correct node, reducing the length of the whole procedure by 80%.

The team working on the magnetometer has included specialists in electronics, precision measurement and optical fibre technology, as well as physicists. The instrument also has potential to be adapted to detect abnormalities in other organs, such as the brain.

The original research project from which the clinical magnetometer is a spin-off was called 'Creating Long Chain Entanglement Using a Phase Sensitive Micromaser'; this initiative received EPSRC funding of just over £450,000. An EPSRC-funded graduate student at the University of Leeds, Melody Blackman, is now playing a key role in developing the miniaturised version of the original magnetometer for clinical use.

The breakthrough is all the more remarkable as it came about quite unexpectedly. According to Professor Ben Varcoe, the team behind it was working on a very different area of research. "We were undertaking quantum physics research into Schrödinger's cat paradox – a paradox first put forward to challenge assumptions made by Einstein in his Special Theory of Relativity," says Professor Varcoe. "We used laser spectroscopy** as part of this work but noticed that the results contained some noise, which we identified as a very weak magnetic field. So we developed a highly sensitive magnetometer to help us understand this noise source. But when I attended a conference in Australia, it came to my attention that the magnetometer could also contribute to healthcare."

Other spin-offs from EPSRC-funded quantum physics work at the University of Leeds include a new type of cryostat that can cool anything placed in it down to 0.3°C above absolute zero (minus 273°C). This cryostat can be used in many applications, including semi-conductor processing and X-ray spectroscopy. Cheap to run and easy to handle, it eliminates the need to use large vats of expensive, difficult-to-handle coolants (e.g. liquid helium).

The quantum physics work could also lead to the development of a new breed of ultra-powerful quantum computers which work much quicker than conventional computers. They could also prove particularly useful in securely encrypting financial and other sensitive data transmitted between banking institutions, for example.

The Engineering and Physical Sciences Research Council (EPSRC) is the UK's main agency for funding research in engineering and the physical sciences. The EPSRC invests around £850 million a year in research and postgraduate training, to help the nation handle the next generation of technological change. The areas covered range from information technology to structural engineering, and mathematics to materials science. www.epsrc.ac.uk/

*A magnetometer is an instrument that measures magnetic fields.

** Spectroscopy is the study of the interaction between radiation and matter. In laser spectroscopy, pulsed lasers are used to excite the molecules contained in the matter, and this enables the interaction to be observed.

Quantum physics is the study of 'quanta'. As described by what is known as quantum theory, quanta are discrete, indivisible units of energy.