Napra Co ., Ltd. (Tokyo, JP) inventor Shigenobu Sekine has created the means to quickly manufacture nano-structured powders with an extremely small, highly uniform spherical shape and high sphericity.  The process can be used to create nano-metals and nano-alloys composed of any single metals or alloys using a self-assembling procedure.

The metal powders are produced by an apparatus in which molten metal, alloys or composites are dropped onto a fast-rotating dish shaped disk in an atmosphere containing one or more inert gases and a small amount of oxidizing gas, and the molten metal is dispersed to be tiny droplets for a predetermined time using centrifugal force, within a cooling-reaction gas, and cooled rapidly to form spherical particlesThe products are characterized as nanoparticles being 1) substantially crystalline; 2) substantially amorphous; or 3) of controlled porosity.

The nano-structured powder particles may be used as the starting materials of magnets, catalysts, electrodes, batteries, heat insulators, refractory materials, and sintered metals. For instance, the powders of the rare earth-iron-boron (R--Fe--B) alloy with the nanocomposite structure may be used a starting material for producing a sintered magnet or bonded magnet having excellent magnetic characteristics. The resulting novel nanostructure consists of micro-sized ferromagnetic phase and novel nano-sized nonmagnetic phase providing for the overall novel nanocomposite

The apparatuses, systems and self assembling processes of Sekine’s invention provides for the production of very small, spherical particles having a nano-composite structure which is a particularly important feature for producing high utility, strong,  permanent magnetic powders. Conventional apparatuses and methods "cannot produce a nanocomposite magnetic material at all, and certainly not in the form tiny spherical powders by a self-assembly technique," according to Sekine, in U.S. Patent Application 20090304834.

U.S. Patent Application 20090304834,  FIG. 1 shows a preferred embodiment of the system for making metal powders with a nano-composite structure from molten metals, including the centrifugal granulation apparatus (also described in U.S. Patent 7,547,346, June 16, 2009) 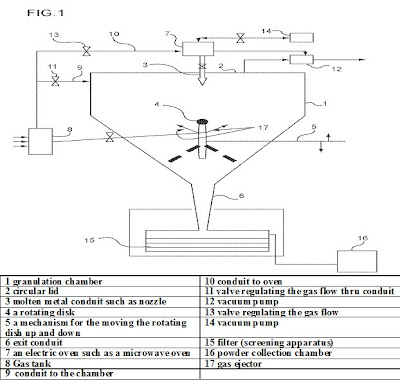 Various kinds of the powders of metals, metal oxides, metal nitrides, metal silicides, and their mixed compounds have been used as the crude starting materials to produce such materials as magnets, catalysts, electrodes, batteries, heat insulators, refractory substances, and sintered metals.

However such powders commonly suffer from poor uniformity of composition, shape, granularity and for spherical powders, poor sphericity (degree of roundness). A mechanical pulverization apparatus is capable of producing particles that have fine structure and are composed of more than two types of components. While of possibly uniform composition, such particles are of poor uniformity in size and shape, and of course are not of spherical shape. Moreover, it is difficult to obtain a nanocomposite structure using mechanical pulverization for the production of fine powders. 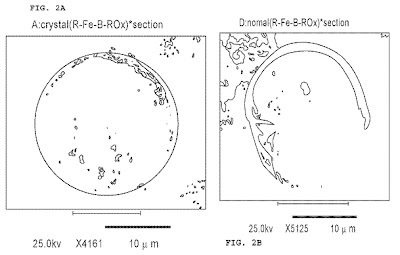 The nanocomposite structures provide for a permanent magnet with excellent magnetic properties employing nano-sized, non-magnetic material, which is a rare earth oxide, ROx, R2O3, RO, RO2, such as neodymium oxide or praseodymium oxide, (or MOx where M is a minor metal) that is incorporated at the inside of ferromagnetic grains, such as R--Fe--B, and/or at their grain boundaries.

Usually, Nd is preferably employed as R, and rare earth elements such as Pr is favorably employed. Nd2O3, RO and RO2 are preferably used in the Napra system. The resulting novel nanostructure consists of micro-sized ferromagnetic phase and novel nano-sized nonmagnetic phase providing for the overall novel nanocomposite structure. The aggregate of nano-sized metal components are separated within the particles by layers or discrete nano-sized bodies of metal oxides, metal nitrides, metal silicides, or separated by evacuated spaces, e.g. pores. 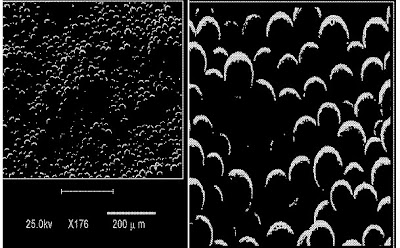