FIG. 7 is an atomic force microscopy image of a typical single wall nanotube detector device that makes up a nanosensor as designed by Harvard University and Medical School scientists. The semiconductor nanowire exhibits a detectable change in an electrical property when less than 10 molecules of the analyte bind to the polymer material. As seen in FIG. 7, the distance between electrodes is about 500 nm and the distance is bridged by the single silicon nanowire (38). 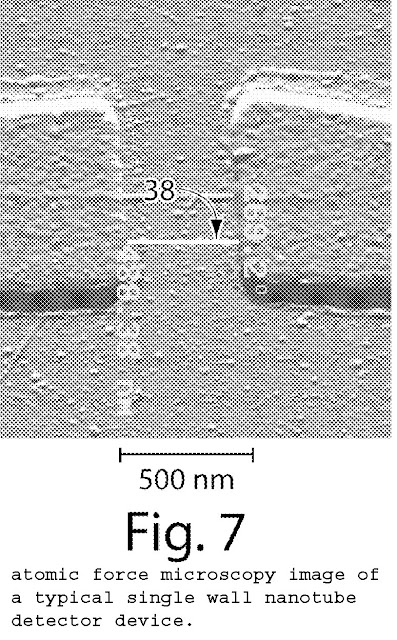 Harvard University & Medical School Electrical sensor devices are comprised of nanowires. A variety of  nanowires are described, along with nanofabrication methods and uses in U.S. Patent Application 20100022012.

The sensors can be nanotubes and nanowires. The surface of the nanowires may be selectively functionalized to serve different purposes and detect varying chemicals and biochemicals. The nanowire nanodetector devices were created by Harvard researchers Charles M Lieber, Hongku Park Qingqiao Wei, Yi Cui and  Wenjie Liang.

While many uses for nanowires have been developed, many more different and important uses are facilitated by Harvard method where the nanowires are functionalized at their surface, or in close proximity to their surface.

FIG. 15 is a schematic view of an InP nanowire. FIG. 15b shows the change in luminescence of a nanowire of FIG. 15a over time as pH varies.

FIG. 15a shows a schematic view of an InP nanowire. The nanowire may be homogeneous, or may comprise discrete segments of n and p type dopants. FIG. 15b shows the change in luminescence of the nanowire of 15a over time as pH is varied. As indicated, the intensity of the light emission of a nanowire changes relative to the level of binding. As the pH increases, the light intensity drops, and as the pH decreases, the light intensity increases. One embodiment  contemplates individually addressed light signal detection by sweeping through each electrode in a microarray. Another embodiment contemplates a two signal detector, such as, an optical sensor combined with an electrical detector.

FIG. 16a depicts an embodiment of a nanowire sensor, specifically a chemical or ligand-gated Field Effects Transistor (FET). 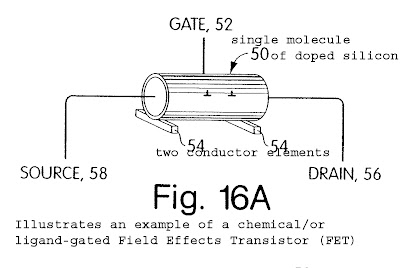 The device of FIG. 16a may be considered a chemical or ligand-FET because the chemical or ligand provides the voltage at the gate which produced the electric field which changes the conductivity of the channel. This change in conductivity in the channel effects the flow of current through the channel. For this reason, a FET is often referred to as a transconductant device in which a voltage on the gate controls the current through the channel through the source and the drain. The gate of a FET is insulated from the conduction channel, for example, using a semi conductor junction such in a junction FET (JFET) or using an oxide insulator such as in a metal oxide semiconductor FET (MOSFET). In Figure 16A,  the SIO2 exterior surface of the nanowire sensor may serve as the gate insulation for the gate.