A tiny chamber made of gold, called a hohlraum, is used to contain the pellet of heavy hydrogen fuel at the center of a fusion reaction at the National Ignition Facility. Laser beams enter through the two open ends of the hohlraum and are reflected in toward the fuel, heating it up to produce the fusion reaction. 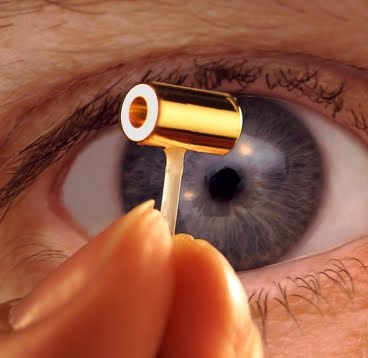 Image: National Ignition Facility
After more than five decades of research, a major milestone toward the harnessing of fusion power is expected within the next year or two. This milestone, known as “fusion ignition,” should take place at an experimental facility built for that purpose in California. Known as the National Ignition Facility, or NIF, it started initial experiments last fall.

Researchers at MIT’s Plasma Science and Fusion Center (PSFC) have played an important part in making this pivotal event possible, and that role is outlined this week in a paper published in the journal Science. In a nutshell, they’ve figured out how to use a second fusion reaction as a kind of backlight, allowing them to see the details of what’s happening inside the primary reaction.

Fusion, the merging of two small atoms into one with a prodigious release of energy, is the process that powers the sun, and is seen as a potential long-term solution to the world’s energy needs because in principle it could supply vast amounts of energy without any greenhouse gas emissions. But the practical harnessing of this powerhouse is thought to remain decades away.

Achieving ignition would represent an important and long-sought step in that direction. One problem for the researchers and engineers trying to make it happen, though, is that the actual reactions would be taking place inside a 2-mm diameter fuel capsule whose temperature and pressure, as it implodes to 1/40 its initial diameter, become much greater than those at the very center of the sun. That’s not an easy environment for taking pictures, or any kind of measurements, in order to fine-tune the system to achieve the desired results.

An MIT team led by PSFC Senior Research Scientist Richard Petrasso developed the fusion backlighting method, which was described in a paper in Science in 2008. Now, the team is reporting in Science that they successfully used the method in a test facility at the University of Rochester, and were indeed able to learn important details about the nature of the electric and magnetic fields in and around this tiny capsule.

With the system they devised, “we’re taking a snapshot of what these electric and magnetic fields look like,” Petrasso says. “This is information is very difficult if not impossible to obtain any other way.”

Providing the ‘sparkplug’ for fusion

NIF uses an approach called indirect drive inertial fusion, in which the tiny capsule of heavy hydrogen fuel is centered inside a cavity called a hohlraum. Laser beams bombard the inside walls of the hohlraum, heating it and generating x-rays that cause the capsule to implode. Ignition, the goal of the NIF, means the point at which the energy released by some fusing atoms at the center of the capsule provides the “sparkplug” that causes other surrounding super-dense atoms to fuse, and so on, in a chain reaction.

But to get to the point of ignition, Petrasso explains, diagnostic tools are needed to reveal the details of what actually happens inside the imploding pellet, where temperatures reach 200 million degrees Kelvin and the pressure can reach a trillion times atmospheric pressure. In order for the ignition to work, the capsule of deuterium and tritium — two heavy forms of the element hydrogen — must be nearly perfectly spherical, nearly perfectly placed at the center of the hohlraum cavity, and must implode in a nearly perfectly symmetrical way.

How much room for error is there in these parameters? That’s one of the things that remains to be determined, and that’s why ways of peering inside the system while it’s in action could play an important role, Petrasso says.

To do that, in these experiments at the Laboratory for Laser Energetics in Rochester, a second capsule was placed nearby and hit by another set of laser beams, producing a flash of protons to illuminate the first capsule, inside a hohlraum.

Nelson Hoffman, a plasma physicist at Los Alamos National Laboratory, says the MIT team has developed “several very effective ways” of measuring important aspects of what goes on inside the fusion capsules, which he says are essential to know “as an indicator of how close they are to the ignition goal.” He adds that as a result, the MIT team has already found surprising phenomena in the way the electric and magnetic fields are distributed.

“The quest to achieve fusion ignition is one of the hardest scientific problems ever tackled,” Hoffman says, “so looking at the problem with ‘new eyes,’ like MIT's proton radiographs, is crucial for detecting phenomena that don't show up any other way.”

In the results being reported this week, for example, the MIT team along with collaborators from Lawrence Livermore National Laboratory, the Laboratory for Laser Energetics, and General Atomics, saw results from one experiment that produced a striking “five-pronged, asterisk-like pattern” in the fields surrounding the imploding capsule. The pattern results from the positioning of the incoming laser beams — something that will require further analysis to understand its potential impact on fusion dynamics.

Petrasso expects that at NIF it will take many months from the beginning of the experiments until the point where ignition is achieved. “This has never been done before, so we need to rely in part on empirical knowledge as we bring the experiment up and create the precise conditions that are required,” says Petrasso, who has worked at the PSFC since 1978. “Many parts of this effort have a sound experimental and theoretical basis, and some less so. Because of this, we need to fill in those gaps, to get the conditions just right.” In addition to this work at the Rochester facility, MIT researchers including six doctoral students have had an ongoing role in the work at the NIF.

Not only could ignition be an important step toward perhaps making fusion power practical one day, he says, but it will certainly be an important scientific tool for better understanding how the sun and other stars work.

“You create conditions which you really only can find in the centers of stars,” he says, even though in these experiments those conditions only exist for a few billionths of a second. “Astrophysicists, for one, will find these conditions extremely interesting and compelling.”
Story by David L. Chandler, MIT News Office