A collaboration led by researchers with the U.S. Department of Energy’s Joint BioEnergy Institute (JBEI) has developed a microbe that can produce an advanced biofuel directly from biomass. Deploying the tools of synthetic biology, the JBEI researchers engineered a strain of Escherichia coli (E. coli) bacteria to produce biodiesel fuel and other important chemicals derived from fatty acids. 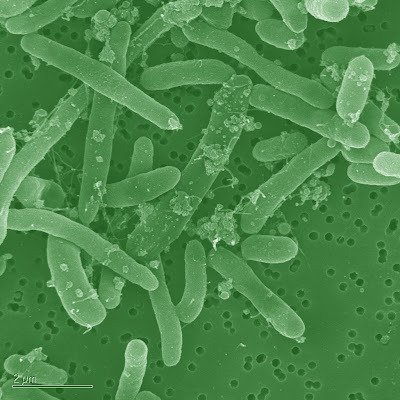 “The fact that our microbes can produce a diesel fuel directly from biomass with no additional chemical modifications is exciting and important,” says Jay Keasling, the Chief Executive Officer for JBEI, and a leading scientific authority on synthetic biology. “Given that the costs of recovering biodiesel are nowhere near the costs required to distill ethanol, we believe our results  can significantly contribute to the ultimate goal of producing scalable and cost effective advanced biofuels and renewable chemicals.”

Keasling led the collaboration, which was was made up of a team from JBEI’s Fuels Synthesis Division that included Eric Steen, Yisheng Kang and Gregory Bokinsky, and a team from LS9, a privately-held industrial biotechnology firm based in South San Francisco. The LS9 team was headed by Stephen del Cardayre and included Zhihao Hu, Andreas Schirmer and Amy McClure. The collaboration has published the results of their research in the January 28, 2010 edition of the journal Nature. The paper is titled, “Microbial Production of Fatty Acid-Derived Fuels and Chemicals from Plant Biomass.”

A combination of ever-increasing energy costs and global warming concerns has created an international imperative for new transportation fuels that are renewable and can be produced in a sustainable fashion. Scientific studies have consistently shown that liquid fuels derived from plant biomass are one of the best alternatives if a cost-effective means of commercial production can be found. Major research efforts to this end are focused on fatty acids – the energy-rich molecules in living cells that have been dubbed nature’s petroleum.

Once E. coli have secreted oil, they sequester themselves from the droplets as shown by this optical image, thereby facilitating oil recovery. 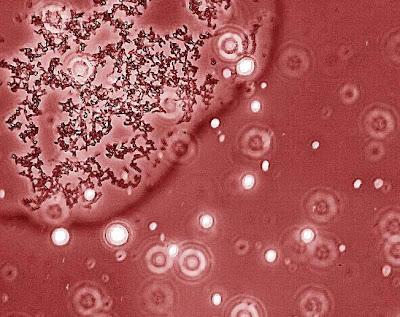 Fuels and chemicals have been produced from the fatty acids in plant and animal oils for more than a century. These oils now serve as the raw materials not only for biodiesel fuel, but also for a wide range of important chemical products including surfactants, solvents and lubricants.

“The increased demand and limited supply of these oils has resulted in competition with food, higher prices, questionable land-use practices and environmental concerns associated with their production,” Keasling says. “A more scalable, controllable, and economic alternative route to these fuels and chemicals would be through the microbial conversion of renewable feedstocks, such as biomass-derived carbohydrates.”

E. coli is a well-studied  microorganism whose natural ability to synthesize fatty acids and exceptional amenability to genetic manipulation make it an ideal target for biofuels research. The combination of E. coli with new biochemical reactions realized through synthetic biology, enabled Keasling, Steen and their colleagues to produce structurally tailored fatty esters (biodiesel), alcohols and waxes directly from simple sugars.

“Biosynthesis of microbial fatty acids produces fatty acids bound to a carrier protein, the accumulation of which inhibits the making of additional fatty acids,” Steen says. “Normally E. coli doesn’t waste energy making excess fat, but by cleaving fatty acids from their carrier proteins, we’re able to unlock the natural regulation and make an abundance of fatty acids that can be converted into a number of valuable products. Further, we engineered our E. coli to no longer eat fatty acids or use them for energy.”

After successfully diverting fatty acid metabolism toward the production of fuels and other chemicals from glucose, the JBEI researchers engineered their new strain of E. coli to produce hemicellulases – enzymes that are able to ferment hemicellulose, the complex sugars that are a major constituent of cellulosic biomass and a prime repository for the energy locked within plant cell walls.

Eric Steen, a bioengineer with JBEI’s Fuels Synthesis Division, was on the team led by Jay Keasling that engineered a biodiesel-producing strain of E. coli bacteria. 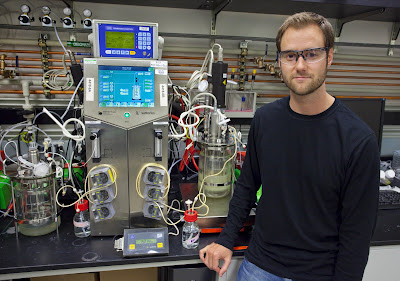 “Engineering E. coli to produce hemicellulases enables the microbes to produce fuels directly from the biomass of plants that are not used as food for humans or feed for animals,” Steen says. “Currently, biochemical processing of cellulosic biomass requires costly enzymes for sugar liberation. By giving the E. coli the capacity to ferment  both cellulose and hemicellulose without the addition of expensive enzymes, we can improve the economics of  cellulosic biofuels.”

The JBEI team is now working on maximizing the efficiency and the speed by which their engineered strain of E. coli can directly convert biomass into biodiesel. They are also looking into ways of maximizing the total amount of biodiesel that can be produced from a single fermentation.

“Productivity, titer and efficient conversion of feedstock into fuelare the three most important factors for engineering microbes that can produce biofuels on an industrial scale,” Steen says. “There is still much more research to do before this process becomes commercially feasible.”

This research was supported by funds from LS9, Inc., and the UC Discovery Grant program. LS9 is using synthetic biology techniques to develop patent-pending UltraClean™ fuels and sustainable chemicals. The UC Discovery Grant program is a three-way partnership between the University of California, private industry and the state of California that is aimed at strengthening and expanding California’s economy through targeted fields of research.

JBEI is one of three Bioenergy Research Centers funded by the U.S. Department of Energy to advance the development of the next generation of biofuels. Headquartered in Emeryville, California, JBEI is a scientific partnership led by Lawrence Berkeley National Laboratory (Berkeley Lab) and including the Sandia National Laboratories, the University of California (UC) campuses of Berkeley and Davis, the Carnegie Institution for Science (located on the campus of Stanford University), and the Lawrence Livermore National Laboratory.

Berkeley Lab is a U.S. Department of Energy national laboratory located in Berkeley, California.  It conducts unclassified scientific research for DOE’s Office of Science and is managed by the University of California. Website at www.lbl.gov/

For more information about JBEI, visit the Website at www.jbei.org

For more information about the research group of Jay Keasling, visit the Website at http://keaslinglab.lbl.gov/wiki/index.php/Main_Page

For more information about LS9, Inc., visit the Website at http://www.ls9.com/

For more information about the UC Discovery Grant program, visit the Website at http://ucdiscoverygrant.org