Nanocomposites of the organo-modified carbon nanotubes and polyolefins can be used to produce both fibers and films with enhanced mechanical and electrical properties, especially the elongation-to-break ratio and the toughness of the fibers and/or films is improved, according to inventors Benjamin Chu and Benjamin S. Hsiao.  Modified carbon nanofiber (MCF) can be blended with ultra-high molecular weight polyethylene (UHMWPE) to form an ultra-tough polymer product.

The nanocomposite may be used to form fibers or films using commercially available equipment and techniques. They can be either melt-spun or gel-spun into fibrous form, or melt-cast or gel-cast into film form, with or without uni-axial/bi-axial stretching for alignment of the modified carbon nanofibers. This minimizes stress to the modified carbon nanofibers and results in improved mechanical and electrical properties as well as improved fire retardant properties.

In summary, the surface modification of carbon nanofiber with octadecylamide groups (short hydrocarbon chains with n=18) significantly facilitated the dispersion of MCNF in (ultra-high molecular weight polyethylene (UHMWPE) during melt processing. The nanocomposite film with only a small amount of MCNF (e.g. 0.2 wt %) showed a significant improvement on the elongation-to-break ratio and thus the toughness.

The MCNF/UHMWPE represents a new type of nanocomposite with super-tough performance. The use of unmodified CNF did not show the significant improvement on the toughness. The super-tough performance of the MCNF/UHMWPE nanocomposite film was due to the plastic flow, induced by the interfacial flow of the UHMWPE chain probably in a gel-like form (the attached octadecylamide groups act as solvent molecules to UHMWPE) that can overcome the typical entanglement problem (thus the brittleness) of solid UHMWPE near the vicinity of MCNF.

FIG. 1 is a scanning electron microscope image of the cross-section of a nanocomposite fiber produced by State University of New York Scientists 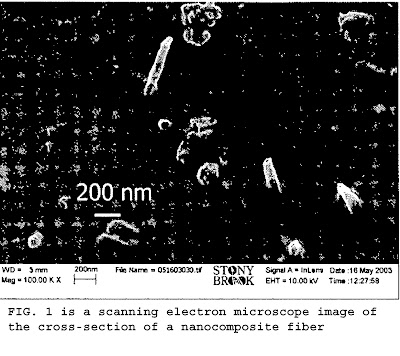 FIG. 3 is a typical SEM image of an untreated CNF sample by State University of New York Scientists 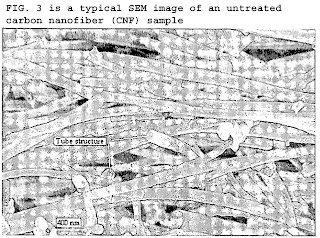 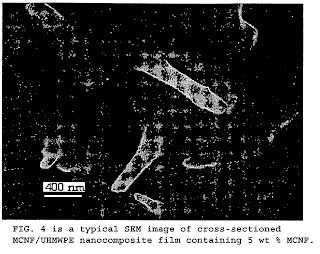 In-situ synchrotron WAXD showed that although the increase in MCNF content induced a higher degree of plastic flow, but the increase in filler interactions decreased the elongation-to-break ratio. The optimal toughness improvement occurred at a very low fraction of MCNF incorporation in UHMWPE.