Los Alamos National Security, LLC (Los Alamos, NM) scientists have created nanophosphor compositions that can be used for wide area radiation detection as well as an inexpensive nanofabrication method for the nanophosphors.

FIG. 1a shows a photographic image of two pieces of the cerium doped transparent nanocomposite scintillator Ce:LaF3(oleic acid). FIG. 1b shows a transmission electron microscope (TEM) image of the nanocomposite of FIG. 1a. 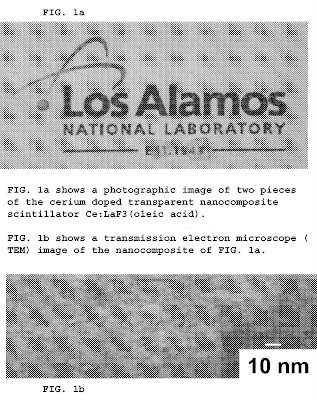 Phosphors are currently used in many important devices such as fluorescent lamps, RGB (red, green, blue) screens, lasers, and crystal scintillators for radiation detectors, radiographic imaging, tagging and other security applications, lighting applications, and nuclear spectroscopy. Perhaps the most important property of any phosphor is its brightness, i.e. its efficiency, which is the ratio of the number of optical photons emitted by the phosphor to the energy absorbed.

The compositions are nanophosphor particles capped with a ligand. The nanophosphor particles have a size of about 20 nanometers. The composition has at least one lanthanide and at least one halide. The weight percent of the lanthanide phosphor is about 5 percent. The light transmission of the composition is about 50 percent, according to inventors Anthony K. Burrell,  Kevin C. Ott, John C. Gordon,  Rico E. Del Sesto and Mark McCleskey.  The method for manufacturing the nanophosphors is detailed in U.S. Patent 7,651,633, granted on January 26th, 2010.

Control over the nucleation and growth (and hence particle size), an appropriate surface capping with either ligands or additional inert lanthanum halide is used to optimize the light output of the phosphor. This lanthanide halide is suitable for pressing into a compact form, or dispersing in a plastic or glass composite having suitable properties for light transmission to prepare a large area scintillator body.

Los Alamos National Security, LLC (LANS) is made up of four top U.S. organizations that have extensive experience in nuclear defense programs, large-scale facilities management, applying science and technology to homeland security challenges, and safety and security—Bechtel National, University of California, The Babcock and Wilcox Company, and the Washington Division of URS.