Time-integrated photograph of an OMEGA laser shot (43633) to measure high-pressure diamond strength. The diamond target is at the center, surrounded by various diagnostics. The bright white light is ablated plasma, and radial yellow lines are tracks of hot target fragments very late in time. 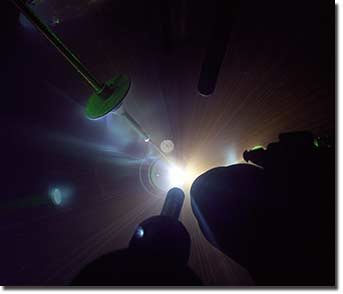 Surprisingly, very little is known about the strength of diamond at extreme conditions. But new research by Lawrence Livermore National Laboratory scientists shows that diamond becomes even stronger during rapid compression.

Using the Janus laser at Lawrence Livermore National Laboratory (LLNL) and the Omega laser at the University of Rochester, Livermore scientists and Rochester and UC Berkeley colleagues showed that when shock waves are applied to diamond with powerful lasers, it can support almost a million times atmospheric pressure before being crushed.

The research has implications for the technological uses of diamond.

“It could also provide insights into the ancient history of natural diamonds found on Earth and in meteorites, where shock waves caused by impact are common,” said Stewart McWilliams, lead author of a paper appearing in the upcoming edition of the journal, Physical Review B.

McWilliams conducted the experiments as a graduate student at UC Berkeley while on a Student Employee Graduate Research Fellowship (SEGRF) at LLNL.

Most natural diamonds are formed at high-pressure, high-temperature conditions existing at depths of 87 to 120 miles in the Earth’s mantle. Carbon-containing minerals provide the carbon source, and the growth occurs over periods from 1 billion to 3.3 billion years (25 percent to 75 percent of the age of the Earth).

In the recent research, the team measured the behavior of natural diamond crystals under shock-wave compression between 1 million and 10 million atmospheres of pressure, and the diamonds were crushed and melted in just a nanosecond (one billionth of a second).

“What we found is that diamond exhibits considerable strength right up to the point it melts,” McWilliams said.

“We reached some surprising conclusions about the strength of diamond,” said LLNL co-author Jon Eggert. “This type of research informs us about the interiors of the gas giants as well our own planet.”

Earlier research conducted by Livermore scientists show that diamond melts at around 6 million atmospheres of pressure and 14,000 degrees Fahrenheit. Their experiments mimicked conditions on the icy gas giant planets (Uranus and Neptune) where, according to their research, icebergs of diamond could float on a sea of liquid carbon.