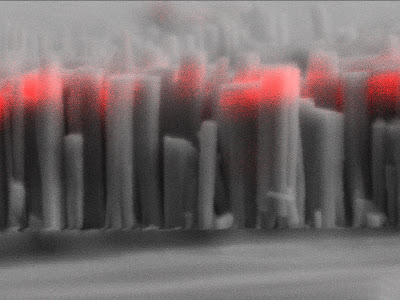 Researchers at the Paul Drude Institute (PDI) for Solid State Electronics are jointly developing white light emitting diodes (LEDs) based on nanocolumns with industry and other research institutes in the SMASH research project.  Nanocolumns of  gallium nitride (GaN) with indium (In) nanoparticles developed by PDI physicists may be grown on a silicon substrate instead of expensive sapphire substrate to make the production of energy-saving white LEDs significantly cheaper.

White light is a mixture of the different spectral colors. White LEDs are usually made of gallium nitride (GaN), which is grown on a sapphire substrate atomic layer atomic layer as a thin layer. Such LEDs initially produce blue light, which is converted to a partially yellow light. Yellow and blue are then converted to clear white light. Sapphire as a substrate makes the production of white LEDs possible, however it is very expensive and that expense stands in the way of the mass consumer acceptance of these luminous dwarfs.

In addition, the light from the LEDs has not been available at the optimum whiteness. In the 7th framework  EU project SMASH (Smart Nanostructured Semiconductors for Energy-Saving Light Solutions), which coordinates the company OSRAM (OS), scientists want to replace sapphire layers now used to grow GaN columns. The sapphire substrate would be replaced with inexpensive silicon, the common material in semiconductor technology.  So far, silicon has not been used as a substrate to grow GaN layers because silicon as substrate is not a good crystal match. The properties of silicon and GaN are quite different, so there is a tension which results in defects in the GaN layer, and that reduces light output.

"The influence of the substrate on the growth of nanocolumns is much lower, tensions are outgrown after a few atomic layers'," says Dr. Achim Trampert of PDI.  Initial tests show that the GaN columns have excellent crystal properties. The columns have a large surface and can therefore emit more light at the same base. To obtain white light, the researchers want  to grow GaN layers to generate columns containing nanoparticles of indium. The indium determines the wavelength, i.e., the color of light.

The columns of different layers emit different colored light, making a total of white light. A transformation of colored light is then no longer necessary.

Scientists must still solve many problems here, for example, that the columns grow still irregular. Ideally, they should all be exactly the same size and the same distance to each other.  Also how much indium under what conditions can mingle, it must be clarified in detail. The role of the PDI-researchers, it will be mainly to investigate the effect of the process of growth of nanocolumns and their composition to their optical and structural properties. They use spectroscopic and microscopic methods with high resolution.

Lighting now consumes 20% of the total energy produced in Germany. Since LEDs are by far the most efficient light sources that could save them a lot of electricity. Until then, it will still take some time: "Only when white LEDs are so cheap that they can be produced as a commodity, will they replace other bulbs in a big way," says Dr. Achim Trampert.