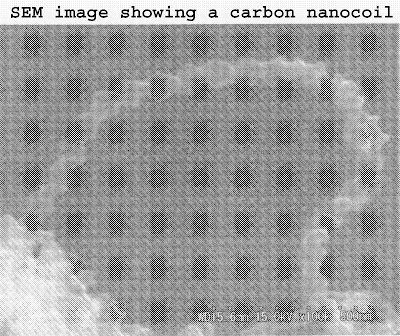 According to the inventors in U.S. Pat. 7,651,668, the nanofabrication process is an improved chemical vapor deposition process using novel convection and shielding equipment. The production process consists of:  a material gas and a catalyst that are introduced through a material supplying tube path and a catalyst supplying tube path together with a carrier gas into a reactor equipped on its outer periphery with a heat applicator for thermally decomposing the material gas.

The reactor has a convention regulator fitted to the discharge end of the catalyst supplying tube path. The convection regulator covers an edge side of the reactor to regulate gas flow in the reactor so that the flow does not reach the edge side. Due to this, a convection state can be efficiently produced in a reaction region. Consequently, it becomes possible to prevent contamination defect caused by accumulation/adherence of concretion of catalyst, which was generated by aggregation of cooled catalyst in the low-temperature region of the reactor and a decomposition product of the material gas. Thus the efficiency of carbon nanostructure production can be improved, say the inventors. The reactor working temperature is 500.degree. C.

With the device structure, it is possible to prevent a decrease in temperature in the vicinity of the introduction section at the time of introducing the material gas and/or the catalyst into the reactor. By this method, the contamination due to accumulation of concretion of the catalyst or material gas decomposition product can be prevented. Further, it is also possible to enlarge the reaction region to the introduction section, to incrase production efficiency of carbon nano structures.   The construction materials and workings of the mass production apparatus are described in great detail in U.S. Patent 7,651,668.

Figure 1 is schematic structure view showing an entire structure of a production device for a carbon nano structure. 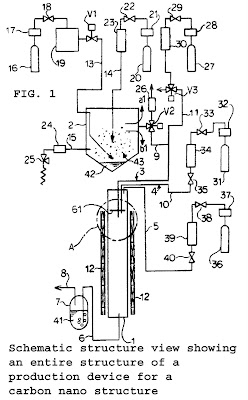