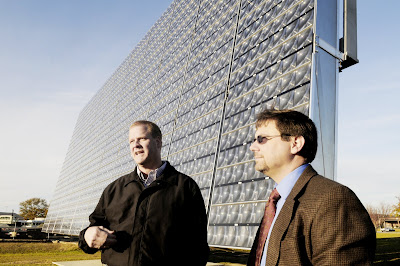 The Robins Air Force Base (Robins, GA) community has consistently been a leader in testing alternative power technologies, but perhaps no other effort has been as visible to the general base populace than a recently installed solar panel.

The gleaming panel, about the size of a drive-in movie screen, incorporates state-of-the-art technology and produces about 25 kilowatts of electricity.

Robert David, an engineering supervisor and head of the APTO office, said the solar panel is the first of its kind in the Southeast. What makes it unique, he said, is that it incorporates sensor technology that allows it to automatically track the sun with concentrated photovoltaic array technology that amplifies the sun's power 500 to 1,000 times.

That is done with the use of what are essentially magnifying glasses. "Of that amount of sun that hits it, you are capturing 38 percent of the energy of that light," he said.

The benefits are that with a projected lifespan of at least 25-years, the 25 kilowatts of electricity that it produces will practically be free, aside from a minimal amount of maintenance work that must be done. However, Mr. David noted that considering the high capital cost, it still would be more expensive than standard electricity.

That could change if Air Force officials decide to purchase solar panels on a larger scale, bringing down the upfront cost.  "If you had farms of these, it could become more economical," Mr. David said.

The solar panel is actually part of a dual green-power initiative. Although the power that it generates will go directly to the base power grid, it is intended to offset that power used by a newly-installed hydrogen fuel production/refueling station.

The station, located within a short walk of the solar panel, produces 10 kilograms of hydrogen per day from water. The hydrogen is used to fuel two base forklifts with hydrogen fuel cells.

The solar panel is here for a one-year demonstration. The base can decide to keep it after that year.

The solar panel is operated by a computer in a nearby building, and it also has its own weather station. If the wind gets too high, the panel will automatically stow, returning to a flat position to avoid any damage. It will even track the sun and produce energy, albeit at a lower level, on a cloudy day.