The illustrations below show how a 3-D crystal made from nanoparticles changes between two distinct states via an intermediate structure (top row, middle) when looped (left) versus unlooped (right) double-stranded DNA chains are used to link the particles. Brookhaven National Laboratoryscientists were able to measure the distance between the particles in each structure by recording x-ray scattering patterns (bottom row). Switching from looped to unlooped DNA increased the interparticle distance by about 6 nanometers. 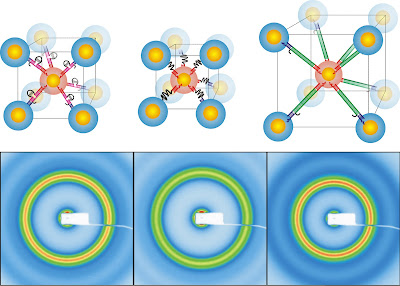 Scientists at the U.S. Department of Energy’s Brookhaven National Laboratory have found a new way to use a synthetic form of DNA to control the assembly of nanoparticles — this time resulting in switchable, three-dimensional and small-cluster structures that might be useful, for example, as biosensors, in solar cells, and as new materials for data storage. The work is described in Nature Nanotechnology, published online December 20, 2009.

The Brookhaven team, led by physicist Oleg Gang, has been refining techniques to use strands of artificial DNA as a highly specific kind of Velcro or glue to link up nanoparticles. Such DNA-based self-assembly holds promise for the rational design of a range of new materials for applications in molecular separation, electronics, energy conversion, and other fields. But none of these structures has had the ability to change in a programmable manner in response to molecular stimuli — until now.

“Now we’re using a special type of DNA-linking device — a kind of ‘smart glue’ — that affects how the particles connect to make structures that are switchable between different configurations,” says Gang. This reliable, reversible switching could be used to regulate functional properties — for example, a material’s fluorescence and energy transfer properties — to make new materials that are responsive to changing conditions, or to alter their functions on demand.

Such responsiveness to changes in environmental conditions and the ability to adopt new forms are hallmarks of living systems. In that way, these new nanomaterials more closely mimic biological systems than any previous nanostructures. Though far from any form of truly “artificial life,” these materials could lead to the design of nanoscale machines that, at a very simple level, mimic cellular processes such as converting sunlight into useful energy, or sensing the presence of other molecules.

Responsive materials would also have benefits in the field of optics or to produce regulated porous materials for molecular separations, Gang says. The scientists achieved the goal of responsiveness by creating structures where the distance between nanoparticles could be carefully controlled with nanometer accuracy.

“Many physical characteristics of nanomaterials, such as optical and magnetic properties, are strongly dependent on the distance between nanoparticles,” Gang explains.

In their previous studies, the scientists used single strands of DNA attached to individual nanoparticles as linker molecules. When the free ends of these DNA strands had complementary genetic code, they would bind to attach the particles. Constraining the interactions by anchoring some of the particles on a surface allowed the scientists to reliably form a variety of structures from two-particle clusters (called dimers) to more complex 3-D nanoparticle crystals.

In the new work, the scientists have added more complicated double-stranded DNA structures. Unlike the single strands, which coil in uncontrollable ways, these double-stranded structures are more rigid and therefore constrain the interparticle distances.

Additionally, some of the strands making up the double-stranded DNA molecules have complicated structures such as loops, which pull the bound particles closer together than when both strands are exactly parallel. By varying the type of DNA device, between looped and unlooped strands, and measuring the interparticle distances using precision techniques at Brookhaven’s National Synchrotron Light Source (NSLS) and at the Center for Functional Nanomaterials (CFN), the scientists demonstrated that they could effectively control the distance between the particles and switch the system from one state to another at will.

The approach resulted in two-configuration, switchable systems both in dimers and nanocrystals, with a distance change of about 6 nanometers — about 25 percent of the interparticle distance. By comparing kinetics in the two systems, they found that the switching between states is faster in the simpler, two-particle system. The dimers also retain their ability to return to their initial state more precisely than the 3-D crystals, suggesting that molecular crowding may be an issue to further investigate in the 3-D materials.

“Our hope is that the ability to induce post-assembly reorganization of these structures by adding DNA or other molecules as external stimuli, and our ability to observe these changes with nanometer resolution, will help us understand these processes and find ways to apply them in new kinds of nanomachinery in which the system’s functionality is determined by the nanoparticles and their relative organization,” says Gang.

Future studies will make use of precise imaging capabilities, such as advanced electron microscopy tools at the CFN and higher-resolution x-ray techniques that will become available at Brookhaven’s new light source, NSLS-II, now under construction.

Gang’s collaborators on this work include Brookhaven colleagues Mudalige Kumara, Dmytro Nykypanchuk and William Sherman, as well as Mathew Maye, a former Brookhaven chemist now at Syracuse University. The research was funded by the DOE Office of Science, by a Laboratory Directed Research and Development grant, and by a Goldhaber Distinguished Fellowship. Brookhaven Science Associates, which manages Brookhaven Lab, has filed patent applications related to this work. For information about these patents and licensing opportunities, contact Kimberley Elcess, elcess@bnl.gov, 631 344-4151.

The Center for Functional Nanomaterials at Brookhaven National Laboratory is one of the five DOE Nanoscale Science Research Centers (NSRCs), premier national user facilities for interdisciplinary research at the nanoscale. Together the NSRCs comprise a suite of complementary facilities that provide researchers with state-of-the-art capabilities to fabricate, process, characterize and model nanoscale materials, and constitute the largest infrastructure investment of the National Nanotechnology Initiative. The NSRCs are located at DOE’s Argonne, Brookhaven, Lawrence Berkeley, Oak Ridge and Sandia and Los Alamos national laboratories. For more information about the DOE NSRCs, please visit http://nano.energy.gov.