Sandia National Laboratory representative thin crystalline-silicon photovoltaic cells – these are from 14 to 20 micrometers thick and 0.25 to 1 millimeter across. 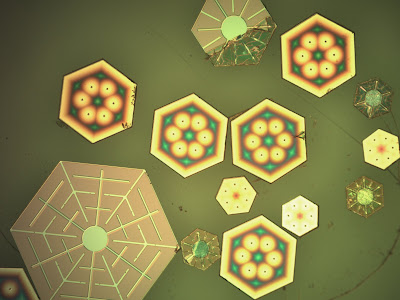 The tiny cells could turn a person into a walking solar battery charger if they were fastened to flexible substrates molded around unusual shapes, such as clothing.

The solar particles, fabricated of crystalline silicon, hold the potential for a variety of new applications. They are expected eventually to be less expensive and have greater efficiencies than current photovoltaic collectors that are pieced together with 6-inch- square solar wafers. The cells are fabricated using microelectronic and microelectromechanical systems (MEMS) techniques common to today’s electronic foundries.

“Eventually units could be mass-produced and wrapped around unusual shapes for building-integrated solar, tents and maybe even clothing,” he said. This would make it possible for hunters, hikers or military personnel in the field to recharge batteries for phones, cameras and other electronic devices as they walk or rest.

Sandia project lead Greg Nielson holds a solar cell test prototype with a microscale lens array fastened above it. Together, the cell and lens help create a concentrated photovoltaic unit. 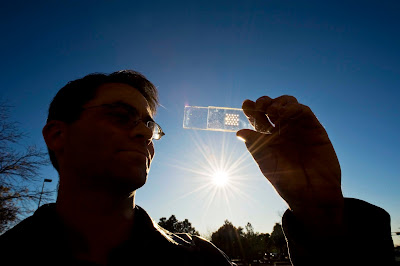 Even better, such microengineered panels could have circuits imprinted that would help perform other functions customarily left to large-scale construction with its attendant need for field construction design and permits.

Said Sandia field engineer Vipin Gupta, “Photovoltaic modules made from these microsized cells for the rooftops of homes and warehouses could have intelligent controls, inverters and even storage built in at the chip level. Such an integrated module could greatly simplify the cumbersome design, bid, permit and grid integration process that our solar technical assistance teams see in the field all the time.”

For large-scale power generation, said Sandia researcher Murat Okandan, “One of the biggest scale benefits is a significant reduction in manufacturing and installation costs compared with current PV techniques.”

“So they use 100 times less silicon to generate the same amount of electricity,” said Okandan. “Since they are much smaller and have fewer mechanical deformations for a given environment than the conventional cells, they may also be more reliable over the long term.”

Another manufacturing convenience is that the cells, because they are only hundreds of micrometers in diameter, can be fabricated from commercial wafers of any size, including today’s 300-millimeter (12-inch) diameter wafers and future 450-millimeter (18-inch) wafers.

Further, if one cell proves defective in manufacture, the rest still can be harvested, while if a brick-sized unit goes bad, the entire wafer may be unusable. Also, brick-sized units fabricated larger than the conventional 6-inch-by-6-inch cross section to take advantage of larger wafer size would require thicker power lines to harvest the increased power, creating more cost and possibly shading the wafer. That problem does not exist with the small-cell approach and its individualized wiring.

Other unique features are available because the cells are so small. “The shade tolerance of our units to overhead obstructions is better than conventional PV panels,” said Nielson, “because portions of our units not in shade will keep sending out electricity where a partially shaded conventional panel may turn off entirely.”

A commercial move to microscale PV cells would be a dramatic change from conventional silicon PV modules composed of arrays of 6-inch-by-6-inch wafers. However, by bringing in techniques normally used in MEMS, electronics and the light-emitting diode (LED) industries (for additional work involving gallium arsenide instead of silicon), the change to small cells should be relatively straightforward, Gupta said.

Each cell is formed on silicon wafers, etched and then released inexpensively in hexagonal shapes, with electrical contacts prefabricated on each piece, by borrowing techniques from integrated circuits and MEMS.

Offering a run for their money to conventional large wafers of crystalline silicon, electricity presently can be harvested from the Sandia-created cells with 14.9 percent efficiency. Off-the-shelf commercial modules range from 13 to 20 percent efficient.

A widely used commercial tool called a pick-and-place machine — the current standard for the mass assembly of electronics — can place up to 130,000 pieces of glitter per hour at electrical contact points preestablished on the substrate; the placement takes place at cooler temperatures. The cost is approximately one-tenth of a cent per piece with the number of cells per module determined by the level of optical concentration and the size of the die, likely to be in the 10,000 to 50,000 cell per square meter range. An alternate technology, still at the lab-bench stage, involves self-assembly of the parts at even lower costs.

Solar concentrators — low-cost, prefabricated, optically efficient microlens arrays — can be placed directly over each glitter-sized cell to increase the number of photons arriving to be converted via the photovoltaic effect into electrons. The small cell size means that cheaper and more efficient short focal length microlens arrays can be fabricated for this purpose.

High-voltage output is possible directly from the modules because of the large number of cells in the array. This should reduce costs associated with wiring, due to reduced resistive losses at higher voltages.Other possible applications for the technology include satellites and remote sensing.

The work is supported by DOE’s Solar Energy Technology Program and Sandia’s Laboratory Directed Research & Development program, and has been presented at four technical conferences this year.

The ability of light to produce electrons, and thus electricity, has been known for more than a hundred years. 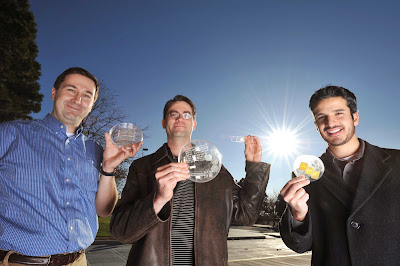