Using a MEMS (Micro Electro Mechanical Systems) manufacturing technique, MEMS RF nanoswitches have been developed by Samsung Electronics scientists, and in addition, practical and commercial nanometer sized RF nanoswitches are on the way to being developed.

FIG. 2 is a perspective schematically showing a RF nanoswitch according to an exemplary embodiment in Samsung’s U.S. Patent 7,638,790 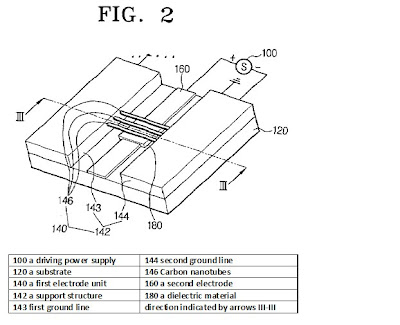 According to the Samsung researchers, by tuning the RF switch capacitance by means of a dielectric material, it is possible to reduce the impedance in the RF nanoswitch in which an increased loss in RF signal is caused due to contact resistance produced by a contact between an existing nanotube and a drain, making it possible to stably transmit an RF signal without any loss. In addition, by tuning the impedance by means of capacitance, it make it possible to commercialize a nanometer-sized subminiature RF nanoswitch.