When light is captured in solar cells, it generates free electrons in a range of energy states. But in order to snare these charges, the electrons must reach the bottom of the conduction band. The problem has been that these highly energized “hot” electrons lose much of their energy to heat along the way.

By using ultrathin solar cells – a film fewer than 30 nanometers thick – the team developed a mechanism able to extract hot electrons in the moments before they cool – effectively opening a new “escape hatch” through which they typically don't travel, said co-author Michael J. Naughton, the Evelyn J. and Robert A. Ferris Professor of Physics at Boston College.

Hot electrons have been observed in other devices, such as semiconductors. But their high kinetic energy can cause these electrons, also known as “hot carriers,” to degrade a device. Researchers have long theorized about the benefits of harnessing hot electrons for solar power through so-called “3rd generation” devices. The team’s success centered on minimizing the environment within which the electrons are able to escape, said Professor of Physics Krzysztof Kempa, lead author of the paper.

Kempa compared the challenge to trying to heat a swimming pool with a pot of boiling water. Drop the pot into the center of the pool and there would be no change in temperature at the edge because the heat would dissipate en route. But drop the pot into a sink filled with cold water and the heat would likely raise the temperature within the confines of the smaller area.

“We have shrunk the size of the solar cell by making it thin,” Kempa said. “In doing so, we are bringing these hot electrons closer to the surface, so they can be collected more readily. These electrons have to be captured in less than a picosecond, which is less than one trillionth of a second.”

The ultra-thin cells demonstrated overall power conversion efficiency of approximately 3 percent using absorbers one fiftieth as thick as conventional cells. The team attributed the gains to the capture of hot electrons and an accompanying reduction in voltage-sapping heat. The researchers acknowledged the film’s efficiency is limited by the negligible light collection of ultra-thin junctions. However, combining the film with better light-trapping technology – such as nanowire structures – could significantly increase efficiency in an ultrathin hot electron solar cell technology. 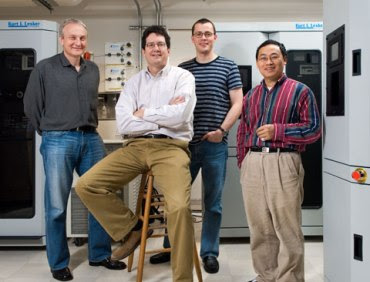