Breast cancer cells after treatment with light-activated, antibody-containing nanocomplexes, which specifically target the cells; upon laser activation they convert light to heat and kill the cancer cells. Dead cells are shown in red within the area where laser was applied (white circle), and live cells are shown in green. 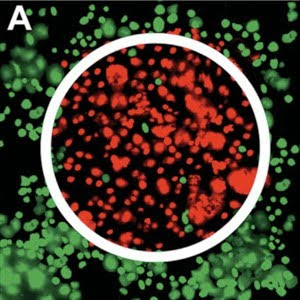 Researchers at Rice University and Baylor College of Medicine have created a nanoparticle trackable with MRIs that locates cancer cells, tags them with a fluorescent dye, and kills them with heat -- a first example of "thernostic," or essentially patient-customized, medical treatment

Researchers at Rice University and Baylor College of Medicine (BCM) have created a single nanoparticle that can be tracked in real time with MRI as it homes in on cancer cells, tags them with a fluorescent dye and kills them with heat. The all-in-one particle is one of the first examples from a growing field called "theranostics" that develops technologies physicians can use to diagnose and treat diseases in a single procedure.

The research is available online in the journal Advanced Functional Materials. Tests so far involve laboratory cell cultures, but the researchers said MRI tracking will be particularly advantageous as they move toward tests in animals and people.

"Some of the most essential questions in nanomedicine today are about biodistribution -- where particles go inside the body and how they get there," said study co-author Naomi Halas. "Noninvasive tests for biodistribution will be enormously useful on the path to FDA approval, and this technique -- adding MRI functionality to the particle you're testing and using for therapy -- is a very promising way of doing this."

Halas, Rice's Stanley C. Moore Professor in Electrical and Computer Engineering and professor of chemistry and biomedical engineering, is a pioneer in nanomedicine. The all-in-one particles are based on nanoshells -- particles she invented in the 1990s that are currently in human clinical trials for cancer treatment. Nanoshells harvest laser light that would normally pass harmlessly through the body and convert it into tumor-killing heat.

In designing the new particle, Halas partnered with Amit Joshi, assistant professor in BCM's Division of Molecular Imaging, to modify nanoshells by adding a fluorescent dye that glows when struck by near-infrared (NIR) light. NIR light is invisible and harmless, so NIR imaging could provide doctors with a means of diagnosing diseases without surgery.

In studying ways to attach the dye, Halas' graduate student, Rizia Bardhan, found that dye molecules emitted 40-50 times more light if a tiny gap was left between them and the surface of the nanoshell. The gap was just a few nanometers wide, but rather than waste the space, Bardhan inserted a layer of iron oxide that would be detectable with MRI. The researchers also attached an antibody that lets the particles bind to the surface of breast and ovarian cancer cells.

In the lab, the team tracked the fluorescent particles and confirmed that they targeted cancer cells and destroyed them with heat. Joshi said the next step will be to destroy whole tumors in live animals. He estimates that testing in humans is at least two years away, but the ultimate goal is a system where a patient gets a shot containing nanoparticles with antibodies that are tailored for the patient's cancer. Using NIR imaging, MRI or a combination of the two, doctors would observe the particles' progress through the body, identify areas where tumors exist and then kill them with heat.

"This particle provides four options -- two for imaging and two for therapy," Joshi said. "We envision this as a platform technology that will present practitioners with a choice of options for directed treatment."

Eventually, Joshi said, he hopes to develop specific versions of the particles that can attack cancer at different stages, particularly early stage cancer, which is difficult to diagnose and treat with current technology. The researchers also expect to use different antibody labels to target specific forms of the disease. Halas said the team has been careful to choose components that are either already approved for medical use or are already in clinical trials.

"What's nice is that every single component of this has been approved or is on a path toward FDA approval," Halas said. "We're putting together components that all have good, proven track records."

The research was sponsored by the Air Force Office of Scientific Research, the Welch Foundation and the Department of Defense's Multidisciplinary University Research Initiative.