Carbon nanotubes are seamless, nanometer scale, single-walled or multiple-walled tubes of graphite sheets with fullerene caps. Single-walled carbon nanotubes (SWNTs) are generally either of the metallic-type or the semiconducting-type. SWNTs have shown promise for nanoscale electronics, chemical sensors, biological imaging, high strength materials, field emission arrays, tips for scanning probe microscopy, gas storage, photonics, and other important applications. The realization of the potential of SWNTs for these and other applications will likely depend on the availability of bulk quantities of SWNTs having uniform properties.

Most synthetic methods for producing SWNTs (arc and laser techniques, carbon vapor deposition, catalytic cracking of hydrocarbons, catalytic disproportionation of carbon monoxide, for example) result in mixtures of metallic and semiconducting SWNTs having a broad range of nanotube chiralities, diameters, and energy bandgaps. Mixtures of SWNTs are generally unsuitable for nanoscale electronics and other applications because the properties of SWNT mixtures are not uniform.

Doorn and Niyogi  separate a mixture of single-walled carbon nanotubes ("SWNTs") into fractions of enriched chirality by preparing an aqueous suspension of a mixture of SWNTs and a surfactant, injecting a portion of the suspension on a column of separation medium having a density gradient, and centrifuging the column. The separation medium used is IODIXANOL and the surfactant is sodium dodecyl sulfate

The present invention is concerned with forming chirally enriched fractions of single-walled carbon nanotubes from a mixture, and with kits useful for forming these fractions. The invention may be used to produce a fraction that is enriched in a narrow range of SWNT chiralities, or in a single chirality. Separation of SWNTs into fractions enriched in a single chirality is important for developing applications in areas such as nanoelectronics, sensors, imaging, tagging, photonics and smart materials applications.

A "suspension of SWNTs" refers to an aqueous mixture of SWNTs with a surfactant that has been subjected to ultrasonication. Surfactants useful with this invention typically have a long alkyl chain terminating in a polar head group. Examples of surfactants include those with C6-C24 alkyl chains having either anionic (SO4-, for example) or cationic (NH4+, for example) head groups. A preferred surfactant with an anionic head group is sodium dodecyl sulfate ("SDS"). An example of a surfactant with a cationic headgroup is cetyltrimethylammonium bromide (CTAB).

The mixing and ultrasonication of the suspension is followed by centrifugation to remove large SWNT aggregates and produce a visibly clear, black liquid phase that is stable upon standing at room temperature for 6 months or longer.

FIG. 1A shows a schematic representation of a column of SWNTs separated according to an a centrifugal method using NaCl, and FIG. 1B shows absorbance spectra of separated fractions of SWNTs depicted in FIG. 1A. 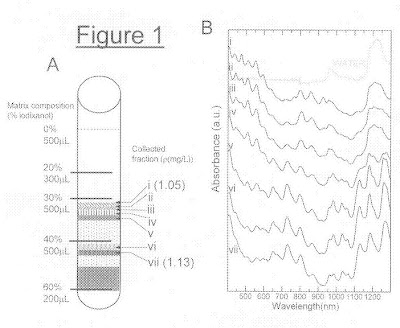 The Regents of the University of California are the assignee for U.S. Patent Application 20090324483

This technology is available for licensing from the LANL Technology Transfer Office.  It provides a rapid, high-throughput, highly selective method for separating single-walled carbon nanotubes by electronic type and chirality.  While other techniques are limited to batch processes of microgram to gram quantities, this invention could potentially be scaled to kilogram or larger quantities.  It could also be performed in either a batch process or continuous flow process.  Existing separation technologies take a half-hour or longer to use, while this invention can separate within minutes.

Other separations can only separate metallic from semiconducting nanotubes, but this invention can also distinguish between the many chiralities, separating chiralities with such high resolution that single chiralities can be isolated.  This method is also tunable to selected the range of chiralities that are needed.  This invention is cheaper in that it uses off-the-shelf reagents that are much cheaper than the reagents needed for existing DNA separations.