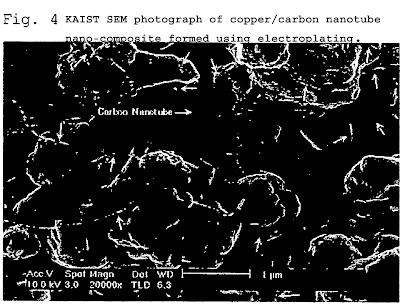 There are no precedents of forming metal/carbon nanotube nano-composite in the type of thin film using electroplating until now due to the characteristics of the bar shape structure and no charges of the carbon nanotube. If metal and carbon nanotubes are simultaneously deposited at the same time by electroplating, densely packed structure unlike the growth of pure carbon nanotubes can be obtained and depositions at desired portions in a type of thin film are possible, also. Thus, all the metal thin films including the existing semiconductor metal interconnection can be replaced, improving their electrical, mechanical and thermal physical properties. Moreover, the KIST manufacturing method can be applied without changing the existing semiconductor interconnection process or the surface finishing process of electronic products, thus the present invention has good marketability and practicality.