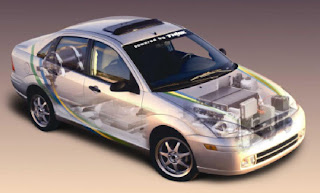 
Icelandic New Energy and Brimborg,  a Ford retailer in Iceland,  report new steps in demonstrating hydrogen as fuel for transport. The hydrogen is made from water and renewable power from local resources.

Ten Ford Focus Fuel Cell Vehicles (FCV) will be integrated into the traffic in Reykjavik in December 2009. These are all used fuel cell vehicles and the goal of this project step is to further test customer acceptance and endurance of the fuel cell technology.

Since 1999 Icelandic New Energy has been acting as a facilitator to integrate hydrogen as fuel into society. Using electro-mobility is a natural extension of the local energy infrastructure, which runs entirely on renewable energy. Using local electricity to substitute for carbonated imported fuel has been a central policy of Icelandic government throughout the twentieth century and may lead to the benchmarking achievement in a country that has been highly dependent on the import of fossil fuels.

Ford recognition of Iceland’s experience, research and skills in handling hydrogen is the key reason for testing the durability and further enhancement of mapping customer acceptance in Iceland. Shell Hydrogen in cooperation with Skeljungur have kept a commercial refueling station running for 6 years, with >98% uptime in the last 2 years. This achievement along with trained researcher and maintenance staff for both vehicles and infrastructure makes Iceland an extremely attractive location for hydrogen and fuel cell testing.

Two Ford vehicles have already been in use in Iceland rendering good experience. The addition will make the total hydrogen vehicle fleet the largest one in Europe with 22 H2 vehicles in service in Reykjavik. The Ford Focus Fuel Cell Vehicle (FCV) represents Ford's commitment to advancing the use and development of alternative fuel technologies. It is one of the industry's first hybridized fuel cell vehicles combining the improved range and performance of hybrid technology with the overall benefits of a fuel cell.

The development of fuel cell vehicles has progressed throughout the last decade in tandem with advancements in clean battery technology. In September 2009 seven large car manufacturers jointly announced that several commercial fuel cell vehicles should be available, “in hundreds of thousands of units by 2015”. With this in mind Iceland is still on the track that was laid out in 1999 envisioning the increased market share of alternative vehicles and domestic fuel.

The experience from a decade of vehicles’ demonstrations, as well as marine and stationary applications, provides a perfect basis for further societal research and demonstrations. The near term goal of the government is to increase drastically the use of domestic energy in transport not the least in e-mobility. Seeing hydrogen fuel cell and battery development go hand in hand towards commercialization is a beautiful vision. This vision is perfectly in accordance with the goal of replacing fossil fuels, which currently amount to 20% of the energy usage, with renewable energy for all sectors in Iceland.

As before the cars will be rented out to companies in Reykjavik. They are mostly used by staff that need to attend to various business on the move. All of them have number plates that begin with H2 for example: H2 015. A hydrogen station at Grjothals provides these vehicles with hydrogen fuel.