Honeywell International Reveals How to Make Nano-Resonators and MEMS Resonators

High-Q resonators are critical components in communications and radar systems, as well as in MEMS-based sensors such as a micro-gyroscope. The combination of high-Q with small force constants enabled by nanoscale resonators can also produce resonators with exceptional force sensitivity.

FIGS. 3a and 3b show Scanning Electron Microsope (SEM) photographs of Honeywell a nano-resonator device with views after E-beam lithography and top layer pattern formation by RIE etch, (a) a disk device (b) a ring device. 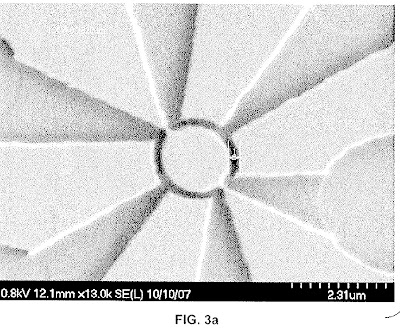 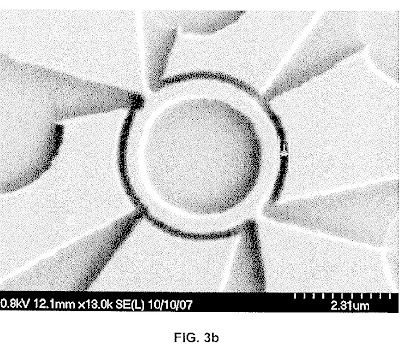 The nanoresonator device can be fabricated on various wafers including a silicon on insulator (SOI) wafer, which includes an insulating layer and a heavily doped silicon layer. The nano structures with high quality factor can be patterned on a film utilizing nano fabrication tools and the patterned structures can be utilized as a mask to form permanent nano structures on the silicon layer by reactive ion etching (RIE). The insulating layer can be removed to form the anchor beams and a cavity by wet etching utilizing an etching solution.

Microelectromechanical systems (MEMS) include mechanical and electrical components having dimensions in the order of microns or smaller. , can be utilized in numerous applications including microsensors and microresonators. Micromechanical resonators have been widely studied for RF signal processing (e.g., oscillator, filter, and mechanical circuit) and for high-precision measurements (e.g., mass/chemical, force, position, and frequency).

Vibrating RF MEMS resonators are widely studied for frequency selection in communication sub-systems because of their high quality factor (Q) and excellent stability against thermal variations and aging. Vibrating RF MEMS resonators can replace off-chip components and improve the system size, cost and power consumption. Such resonators in sizes of ten-micron have achieved very high quality factors for example, Q up to 10,000 to 100,000 in air at MHz-GHz frequencies, and are envisioned to replace the high-Q components in existing wireless systems.

Nanoscale structures are becoming increasingly important because they provide the basis for devices with dramatically reduced power and mass, while simultaneously possessing enhanced capabilities. Nanoscale mechanical structures hold the potential to enable the fabrication of high-Q mechanical resonators with high mechanical responsivity over a wide dynamic range. Such devices can form very low-loss, low-phase-noise oscillators for filters, local oscillators, and other signal processing applications.

The resonator scaling from micro to nano size can provide significant advantages of multiple times or order of magnitude higher sensitivity, higher frequency, lower power, and higher density. The problem associated with the development of such nanoresonator (ex., nanowire resonator) is due to the reliable low-loss structure and fabrication.

Also, such nanoresonator often results in large air damping losses and anchor losses that affects Q. In addition to anchor losses, air-damping forces create more losses when operating in atmosphere and hence further reduction in Q. Low-loss microresonator structures have been demonstrated using MEMS processes. However, it is not easy to fabricate a low-loss structure in 1 um or sub micron size utilizing prior art fabrication process because of the smaller size and multiple sub-micron-alignment needs. Based on the foregoing it is believed that a need exists for an improved low-loss and high-Q nanoresonator device.

The nanoresonator can also be fabricated on other wafers with structure similar to SOI wafer, such as a wafer with top electrically-conductive layer above a middle insulation layer on the surface of a substrate. The nano structures with high quality factor can be patterned on a film utilizing nano fabrication tools and the patterned structures can be utilized as a mask to form permanent nano structures on the conductive layer of the wafer by reactive ion etching (RIE). The insulating layer can be removed to form the anchor beam and a cavity under the nano structures by wet etching utilizing an etching solution. 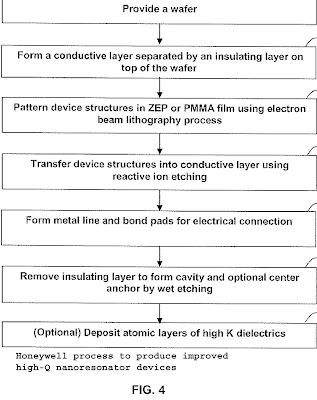 FIG. 5 shows a photograph of a disk device after atomic layer deposition of TiO2. 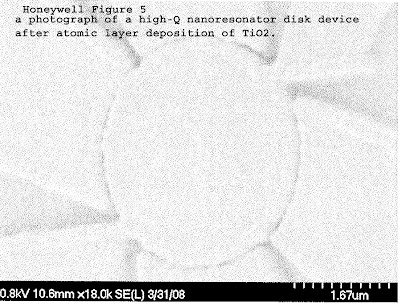