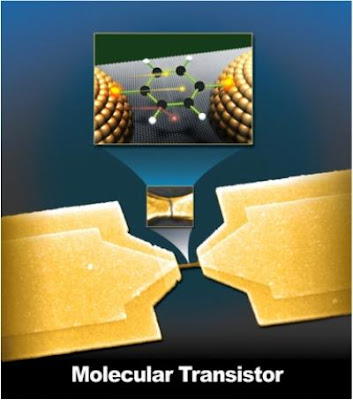 Engineers applied a voltage to a benzene molecule, allowing them to raise and lower its energy states and demonstrate that the molecule could be used exactly like a traditional transistor.

A group of scientists has succeeded in creating the first transistor made from a single molecule. The team, which includes researchers from Yale University (New Haven, CT) and the Gwangju Institute of Science and Technology in South Korea, published their findings in the December 24 issue of the journal Nature.

The team, including Mark Reed, the Harold Hodgkinson Professor of Engineering & Applied Science at Yale, showed that a benzene molecule attached to gold contacts could behave just like a silicon transistor.

“It’s like rolling a ball up and over a hill, where the ball represents electrical current and the height of the hill represents the molecule’s different energy states,” Reed said. “We were able to adjust the height of the hill, allowing current to get through when it was low, and stopping the current when it was high.” In this way, the team was able to use the molecule in much the same way as regular transistors are used.

The work builds on previous research Reed did in the 1990s, which demonstrated that individual molecules could be trapped between electrical contacts. Since then, he and Takhee Lee, a former Yale postdoctoral associate and now a professor at the Gwangju Institute of Science and Technology, developed additional techniques over the years that allowed them to “see” what was happening at the molecular level.

Being able to fabricate the electrical contacts on such small scales, identifying the ideal molecules to use, and figuring out where to place them and how to connect them to the contacts were also key components of the discovery. “There were a lot of technological advances and understanding we built up over many years to make this happen,” Reed said.

There is a lot of interest in using molecules in computer circuits because traditional transistors are not feasible at such small scales. But Reed stressed that this is strictly a scientific breakthrough and that practical applications such as smaller and faster “molecular computers”—if possible at all—are many decades away.

“We’re not about to create the next generation of integrated circuits,” he said. “But after many years of work gearing up to this, we have fulfilled a decade-long quest and shown that molecules can act as transistors.”

Other authors of the paper include Hyunwook Song and Yun Hee Jang (Gwangju Institute of Science and Technology); and Youngsang Kim and Heejun Jeong (Hanyang University).