Korean researchers at the Inha-Industry Partnership Institute have developed a new weapon for the war on cancer: silicon nanobombs. The smart nanobombs kill cancer cells but leave normal cells unharmed.

FIG. 10 from Inha-Industry Partnership Institute’s U.S Patent Application 20090326520  is a capture image of a cancer killing silicon nanobomb explosion occurring upon the irradiation of NIR light onto porous silicon nanobombs with sulfur entrapped within its pores. Silicon nanobombs have been successfully used to kill breast cancer cells. 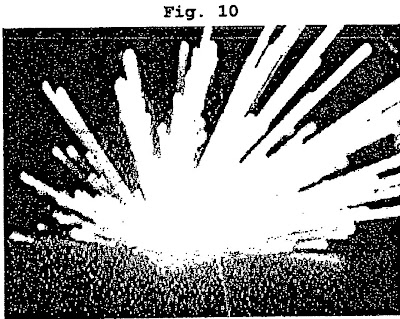 The porous silicon nanobomb of the present invention can be heated by NIR light with an irradiation intensity of from 100 to 400 mW/cm2, which is only about one hundredth of that required for heating nanoshells, that is, 35 W/ cm2. For carbon nanotubes, the irradiation intensity of NIR light amounts to 1 to 4 W/cm2 Therefore, the nanobombs are useful in the treatment of cancer without damaging normal cells, in contrast to nanoshells and carbon nanotubes.

Thermotherapy is a minimally invasive cancer treatment technique that can replace invasive surgical treatment. Entailing a relatively simple operation in addition to minimal invasiveness, thermotherapy makes possible a short recovery time. Also, thermotherapy is a type of physical therapy with fewer limitations than chemotherapy and is typically used in combination with both of the invasive therapies. In addition, it allows repeated treatments without the accumulation of toxic side effects. Thermotherapy (or thermal ablation therapy) includes laser-induced thermotherapy, microwave and radiofrequency (RF) ablation, magnetic thermal ablation, and focused ultrasound.

Most of them, however, have shortcomings in that the treatment takes a long period of time and that its lesion boundaries are not well defined. Alternatively proposed was magnetic thermotherapy based on using alternating current to heat oxide nanoparticles in tumor cells. Although disadvantageous in that it requires a large quantity of iron for sufficient thermal effects, this magnetic thermotherapy has an advantage over the other thermotherapies in that it can selectively heat only the cells filled with oxides of iron.

Inha-Industry Partnership Institute’s method for treating cancer uses biocompatible and biodegradable porous silicon nanobombs which can generate heat sufficient to selectively kill cancer cells upon exposure to NIR light at a low intensity, with accompaniment of neither toxicity to normal cells nor side effects.

FIG. 1 is a schematic diagram of an electrochemical anodization cell for use in the preparation of nano-porous silicon 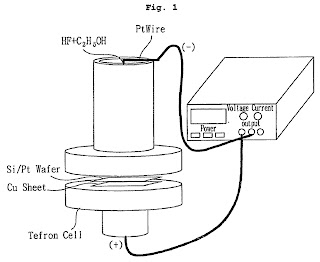 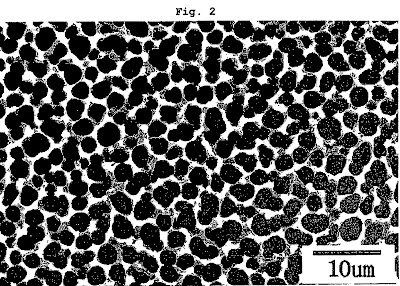 FIG. 3 is an SEM showing nano-porous silicon in a cross-sectional view 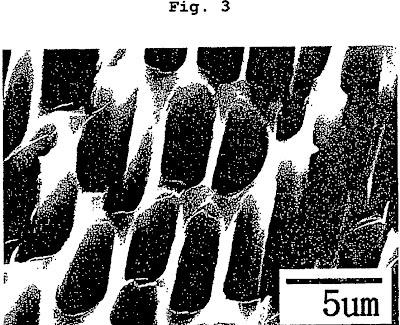 FIG. 9 is a captured  image of an explosion occurring upon the irradiation of NIR light onto the porous silicon bombs with NaClO4.1H2O entrapped within the pores thereof.  As seen in FIGS. 9 and 10, the bombs of sulfur (FIG. 10) were exploded on a larger scale than were the bombs of NaClO4.1H2O (FIG. 9). 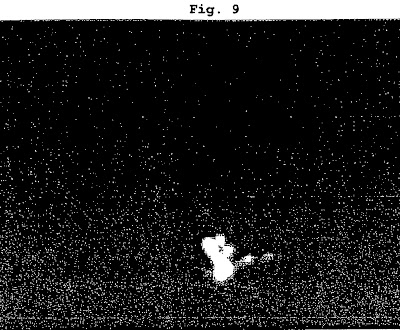 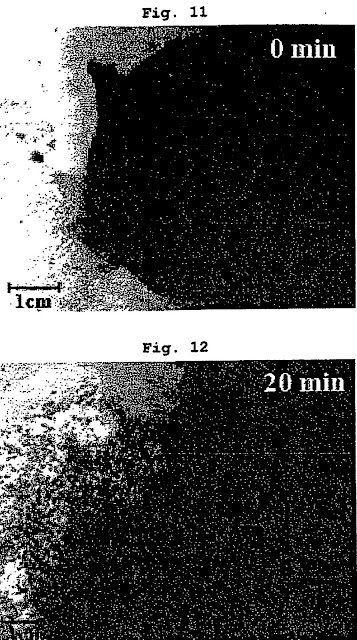 Upon NIR exposure in the presence of the PSi suspension, the cells seemed to be blown up and burnt black. Explosion was observed to occur inside the cell clusters as inferred from the morphology of dead cells. Also, the bubbles showed that the cells were blown up in the explosion. Bubbles found around dead cells were evidence of the vigorous boiling of the NaCl solution within porous silicon particles, implying that the explosion of porous silicon particles resulted from the temperature elevation of the NaCl solution localized within the silicon particles to exceed the boiling point.