The Defense Advanced Research Projects Agency (DARPA) has announced that the MIT Red Balloon Challenge Team won the $40,000 cash prize in the DARPA Network Challenge, a competition that required participants to locate 10 large, red balloons at undisclosed locations across the United States. The MIT team received the prize for being the first to identify the locations of all 10 balloons.

“The Challenge has captured the imagination of people around the world, is rich with scientific intrigue, and, we hope, is part of a growing 'renaissance of wonder' throughout the nation," said DARPA director,

DARPA announced the Network Challenge to mark the 40th anniversary of the ARPANet, pre-cursor to today’s Internet, to explore how broad-scope problems can be tackled using social networking tools. The Challenge explores basic research issues such as mobilization, collaboration, and trust in diverse social networking constructs and could serve to fuel innovation across a wide spectrum of applications.

DARPA plans to meet with teams to review the approaches and strategies used to build networks, collect information, and participate in the Challenge.

The table below give the final standings in the DARPA network challenge. (click to enlarge) 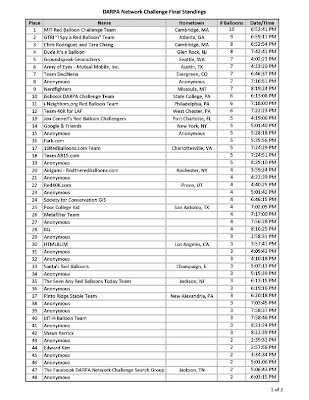