Transmission electron microscopy image of Case Western Reserve University nanocomposites of tunicate cellulose whiskers and ethylene oxide-epichlorohydrin (EO-EPI) copolymer which mimics the ability of a sea urchin to shift between elasticity and stiffness. 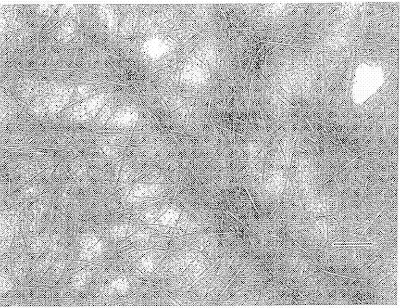 Many echinoderms, such as sea cucumbers, share the ability to rapidly and reversibly alter the stiffness of their connective tissue. In the case of sea cucumbers, this morphing occurs within seconds and creates considerable survival advantages. A series of recent studies on the dermis of these invertebrates has provided evidence that this defense mechanism is enabled by a nanocomposite structure in which rigid, high-aspect ratio collagen fibrils reinforce a viscoelastic matrix of fibrillin microfibrils.

The stiffness of the tissue is regulated by controlling the stress transfer between adjacent collagen fibrils through transiently established interactions. These interactions are modulated by soluble macromolecules that are secreted locally by neurally controlled effector cells. The dermis of the Cucumaria frondosa and other sea cucumber species represents a compelling model of a chemo responsive material in which a modulus contrast by a factor of 10 (.about.5 to .about.50 MPa) is possible.

Inventors Christoph Weder (professor, Adolphe Merkle Institute, Polymer Chemistry and Materials, University of Fribourg), Stuart J. Rowan, Jeffrey R. Capadona, Dustin J. Tyler, Kadhiravan Shanmuganathan  and Otto Van Den Berg  developed a variety of polymer nanocomposites that exhibit reversible modulus and strength switching in response to stimuli such as a chemical, thermal and/or electrical stimulus. Relatively, large orders of modulus contrast can be obtained utilizing the systems they created. The modulus contrast is a factor greater than 2.5. A wide range of nanoparticles can be used to induce modulus changes in an array of matrix polymers.

Tunicate nano whiskers are desirable for use as their aspect ratio is relatively high, which is advantageous for the formation of percolating architectures. Because of the high density of strongly interacting surface hydroxyl groups, cellulose whiskers have a strong tendency for aggregation. The whisker-whisker interactions can be moderated by the introduction of sulfate surface groups, which promote dispersability in select hydrogen-bond-forming solvents. This balance of attractive and repulsive interactions is an important factor for the fabrication of cellulose-whisker nano-composites.

The nanoparticle network is a substantially continuous three-dimensional network of substantially dispersed nanoparticles that exhibit at least some interactions among each other; and inducing a modulus change in the polymer nanocomposite by exposing the polymer nanocomposite to a stimulus that reduces interactions among the nanoparticles, wherein the modulus change exhibited is by a factor greater than 2.5.