Lignin, a key component of plant cell walls, is normally synthesized from three simple monolignols (top). The hydroxyl group (OH), shown in red, must remain unmodified for these precursors to link up. Brookhaven National Laboratory (BNL) biochemist Chang-Jun Liu and his team created a novel enzyme (green "ribbon" structure) that can methylate this specific hydroxyl group. This enzyme may therefore lead to ways to interfere with lignin biosynthesis in plants to make them easier to break down for biofuels. 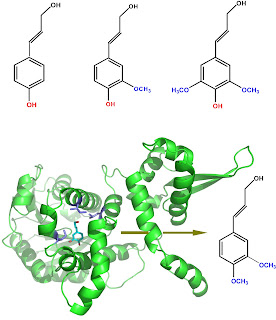 Scientists at the U.S. Department of Energy’s (DOE) Brookhaven National Laboratory (Upton, NY)  have created a new enzyme and demonstrated its potential ability to interfere with the production of lignin, a key cell-wall component in plants. This approach to enzyme engineering, described in the January 1, 2010, issue of the Journal of Biological Chemistry (available online December 25, 2009), could be used to further understand the mechanisms of lignin biosynthesis, and may lead to the production of plants that are easier to convert to biofuels.

“Increasing the ‘digestibility’ of plant matter is one main approach to making plants a viable alternative energy source,” said Brookhaven biochemist Chang-Jun Liu, lead author on the paper. “Our group has been working to achieve that goal by elucidating the catalytic mechanisms of plant enzymes, and then using that knowledge and the tools of molecular biology and protein engineering to influence the way plant cell walls are constructed.”

Their main targets have been enzymes that synthesize key cell-wall components, such as lignin. Plants with less lignin in their cell walls are easier to break down and convert to fuel products. “We understand relatively well how lignin precursor molecules are synthesized. They have very specific patterns of chemical modification known as methylation, which appear to be essential to their ability to link up to form the lignin polymer,” said Liu. “From this knowledge, we came up with the hypothesis that changing the methylation pattern on these precursor molecules could be one way to inhibit lignin synthesis.”

The scientists first looked for natural plant enzymes with different methylation patterns — that is, enzymes that methylate at different chemical locations than those typically involved in lignin synthesis. The trick is that these enzymes normally work on different substrates, not the lignin precursors. So the scientists’ goal was to change the parts of the enzyme that recognize the substrate so it would work on lignin precursors — while retaining the desired methylation location.

To identify the parts of the enzyme to change, the scientists used computational tools to examine structural models of the enzyme and its genetic code — the pattern of DNA bases known as A, T, G, and C that tells cells which amino acids should be linked up to form the final protein. They compared these data with the same information for the enzymes involved in lignin synthesis. This process led them to discover seven possible amino acid sites that might need to be changed to alter the enzyme’s specificity so it could act on the lignin precursors.

Through a tedious process of systematically modifying the gene for the enzyme and then screening the products, the scientists found that changes at two of the seven sites could make new enzymes that were able to methylate the lignin precursors in the desired way. Additional modifications and testing revealed that the combination of these two changes produced the most effective enzyme.

The scientists then used the original enzyme structure to build a model of the new version docked with the lignin precursor molecules as they would be during methylation. This helped them identify additional amino acid sites to modify to strengthen the interaction and activity.

The final enzyme shows nearly ideal activity for methylating the lignin precursors at the desired location. Test-tube based biochemical tests showed that when this new enzyme was used to methylate the lignin precursors, the modified precursors were no longer able to link up to form lignin polymer. This provided direct experimental evidence for the long-proposed lignin synthesis mechanism described above.

The next step will be to see if it works in plants. The scientists will engineer plants with the gene for the new enzyme to see if it reduces the amount of lignin in the plant cell walls.

“Our hope is that this will introduce a new step at the end of the normal lignin biosynthetic pathway and redirect synthesis from the conventional lignin precursors to the specifically methylated ‘dead’ products to yield less lignin. This work will also help us further understand the lignin polymerization process in planta,” said Liu.

“Since we know less lignin makes cell walls easier to digest, this may be an effective biochemical approach to engineering plants for more efficient biofuel production,” Liu said. 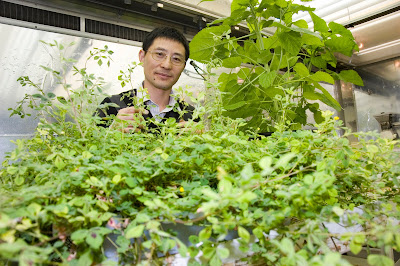 This work was done by Liu and his postdoc Mohammad Bhuiya. The work was funded by the DOE Office of Science.