In the current issue of Science, Stuart Lindsay, director of Arizona State University’s Center for Single Molecule Biophysics at the Biodesign Institute, along with his colleagues, demonstrates the potential of a new DNA sequencing method in which a single-stranded ribbon of DNA is threaded through a carbon nanotube. 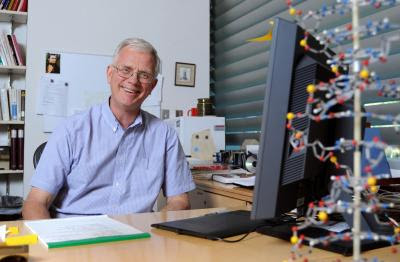 Faster sequencing of DNA holds enormous potential for biology and medicine, particularly for personalized diagnosis and customized treatment based on each individual's genomic makeup. At present however, sequencing technology remains cumbersome and cost prohibitive for most clinical applications, though this may be changing, thanks to a range of innovative new techniques.

In the current issue of Science, Stuart Lindsay, director of Arizona State University's Center for Single Molecule Biophysics at the Biodesign Institute, along with his colleagues, demonstrates the potential of one such method in which a single-stranded ribbon of DNA is threaded through a carbon nanotube, producing voltage spikes that provide information about the passage of DNA bases as they pass through the tube—a process known as translocation.

Carbon nanotubes are versatile, cylindrical structures used in nanotechnology, electronics, optics and other fields of materials science. They are composed of carbon allotropes—varied arrangements of carbon atoms, exhibiting unique properties of strength and electrical conductivity.

Traditional methods for reading the genetic script, made up of four nucleotide bases, adenine, thymine, cytosine and guanine (labeled A,T,C,&G), typically rely on shredding the DNA molecule into hundreds of thousands of pieces, reading these abbreviated sections and finally, reconstructing the full genetic sequence with the aid of massive computing power. A decade ago, the first human genome—a sequence of over 3 billion chemical base pairs—was successfully decoded, in a biological tour de force. The undertaking required around 11 years of painstaking effort at a cost of $1 billion dollars. In addition to the laboriousness of existing techniques, accuracy is compromised, with errors accumulating in proportion to the number of fragments to be read.

A new strategy involves the use of nanopores—orifices of molecular diameter that connect two fluid reservoirs. A constant voltage can be applied between two electrodes located at either end of the nanopore , inducing an ionic current to flow through the length of the nanopore's enclosed channel. At this scale, the passage of even a single molecule generates a detectable change in the flow of ionic current through the pore. This current is then electronically amplified and measured. Only fairly recently have state of the art micro-manufacturing techniques enabled researchers to construct nanopores at the scale of individual molecules, opening up many new possibilities for single-molecule manipulation and research.

In the current study, single walled carbon nanotubes, 1-2 nm in diameter, were used for the conducting channels. When a current was induced through the nanotube, segments of single-stranded DNA (known as oligomeres) made up of either 60 or 120 nucleotides, were drawn into the opening of the nanotube and translocated from the anode side of the nanotube to the output cathode side, due to the negative charge carried by the DNA molecule. The velocity of DNA translocation is dependent on both the nucleotide structure and molecular weight of the DNA sample.

The carbon nanotubes were grown on an oxidized silicon wafer. Results indicate that among the successfully formed nanotubes—those fully opened and without leakage along their length—a sharp spike in electrical activity is detected during the process of DNA translocation. Further, reversing the bias of the electrodes causes the current spikes to disappear; restoring the original bias caused the spikes to reappear.

Lindsay stresses that the transient current pulses, each containing roughly 10x7charges, represent an enormous amplification of the translocated charge. A technique known as quantitative polymerase chain reaction (qPCR) was used to verify that the particular carbon nanotubes displaying these anomalously sharp current spikes—around 20 percent of the total sample, were indeed those through which DNA translocation had occurred.

The team carried out molecular simulations to try to determine the mechanism for the anomalously large ionic currents detected in the nanotubes. Observation of current-voltage curves registered at varying ionic concentrations showed that ion movement through some of the tubes is very unusual, though understanding the precise mechanism by which DNA translocation gives rise to the observed current spikes will require further modeling. Nevertheless, the characteristic electrical signal of DNA translocation through tubes with high ionic conductance may provide a further refinement in ongoing efforts to apply nanopore technology for rapid DNA sequencing.

Critical to successful rapid sequencing through nanopores is the precise control of DNA translocation. The hope is that genetic reading can be significantly accelerated, while still allowing enough time for DNA bases to be identified by electrical current traces. Carbon nanotubes provide an attractive alternative, making the control of nanopore characteristics easier and more reliable.

If the process can be perfected, Lindsay emphasizes, DNA sequencing could be carried out thousands of times faster than through existing methods, at a fraction of the cost. Realizing the one-patient-one-genome goal of personalized medicine would provide essential diagnostic information and help pioneer individualized treatments for a wide range of diseases.

To see Biodesign Institute at Arizona State University scientist Dr. Stuart Lindsay explain the potential of a sequencing method in which a single-stranded ribbon of DNA is threaded through a carbon nanotube in a video follow this link: http://www.eurekalert.org/multimedia/pub/19288.php?from=151548