Nanotechnologists are working at a fever pitch to stake early claims in the intellectual gold mines of nanotechnology.

A total of 4,398 patents referencing nano were granted in 2009, setting an all time record that will likely be eclipsed in 2010 if the current trend continues as there are more than 49,000 pending U.S. Patent Applications that reference nano as of December 29, 2009. 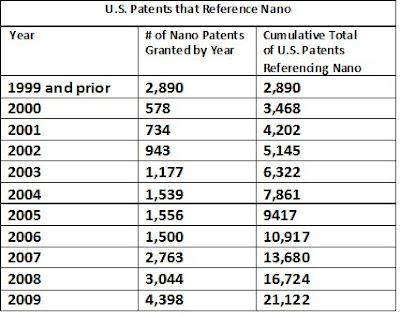 The following figure illustrates the steadily increasing cumulative number of U.S. Patents granted referencing a nanotechnology, although a small percentage refer to nano measurements of time. 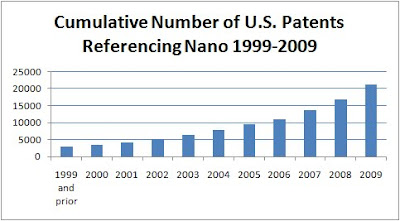 24,442 U.S. Patents have been granted that reference either nano or nanotube.   The total number is even higher when patents that involve nanomaterials such as fullerenes or molecular manipulators but which do not use the word nano or nanotube in the patent are counted.

The following table counts U.S. Patents that reference either nano or nanotube in the various patent categories such as Title, Abstract, Claims, References, Specifications & Descriptions and finally all fields.  The first column shows total number U.S. Patents granted (24,441)  while the third column counts references by patent applications (49,208). (Update on Dec. 31, the number of pending patent applications referencing nano or nanotubes increased to 49,498).

If patents and patent applications are considered as representative of an individual product or process, one could surmise that there are more than 73,600 nanotechnology products or processes in production or under development especially as many of the patents and applications refer to more than one applicable use for a process or product using the nanotechnology referenced in the patent document.

The applications range from just about every modern electronic and photonic device to making better clothing, more nutritious and abundant food and cleaner water and air.  Other applications apply to automobiles, aerospace applications, energy production and chemical manufacturing as well as major uses in the construction industry to name only a few.