US Technology Corporation (Canton, OH) provides comprehensive surface preparation and coatings removal to the aerospace, aircraft, electronics, automotive, shipping, petroleum and structural industries. Raymond F. Williams and Daniel L. Kinsinger detail a method for making  polymeric blast media products with nanoclays in U.S. Patent 7,622,518. The first step involves blending a melamine compound with a cellulosic material and compression molding the first blend. This first blend is then cooled and then ground. In the next step of this method, a urea compound is blended with a nano-clay material to produce a second blend and compression molded. This compression molded second blend is then ground to produce a particulate second blend. The particulate first blend is then blended with the particulate second blend to yield a blast media product. It can cost effectively removes organic coatings from substrates without substantial risk of damage to sensitive metal or composite substrates according to inventors Williams and Kinsinger.

The blast media with nanoclay may be used for removal of standard aerospace coatings such as epoxy primers and polyurethane topcoats from very sensitive metal or composite substrates with better efficiency than was previously available. This media coating can be removed at accelerated speeds as compared to prior art blast media. The safety factor of this media on thin skin aluminum or composite surfaces is high. Coatings can be removed with virtually no damage to such substrates, leaving protective coatings such as cladding and anodizing intact. Also, the durability of this media helps to maintain economic feasibility in large-scale aerospace applications.

Various different embodiments of this media address specific applications related to the aerospace industry and industry in general. All of these embodiments make use of nanometer-sized montmorillonite clay particles, which improve surface integrity and provide advantages in the mechanical and thermal properties of the polymer. These results are achieved with no increase in specific gravity due to the very low amounts of nano-particle needed, i.e. between 1/2% and 5% by weight. These results demonstrate that the overall increase in efficiency of this media is three to four times faster than unfilled polymer while the durability has more than doubled.

The patent also encompasses an abrasive media for the removal of coating or for the preparation of surfaces prior to coating or cleaning comprising a thermosetting polymer with an additive, wherein the additive has a major dimension and a minor dimension. The minor dimension is from about 1 nm to about 20 nm. The additive may be the nano-clay material, or alternatively may be a polyhedral oligomeric silsesquioxane material. 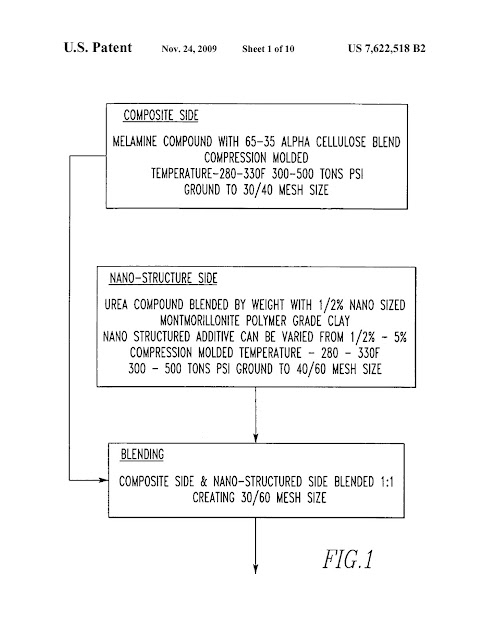