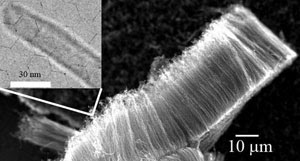 Prabhakar Bandaru, a professor in the UCSD Department of Mechanical and Aerospace Engineering, along with graduate student Mark Hoefer, discovered that artificially introduced defects in carbon nanotubes can aid the development of supercapacitors.

“While batteries have large storage capacity, they take a long time to charge; while electrostatic capacitors can charge quickly but typically have limited capacity. However, supercapacitors/electrochemical capacitors incorporate the advantages of both,” Bandaru said.

Carbon nanotubes (CNTs) have been generally hailed as one of the wonder materials of the 21st century and have been widely recognized as ushering in the nanotechnology revolution. They are cylindrical structures, with diameters of 1 to 100 nanometers, that have been suggested to have outstanding structural, chemical, and electrical, characteristics based on their atomically perfect structures with a large surface area-to-volume ratio. However, defects are inevitable in such a practical structure, an aspect that was first investigated by UCSD engineering graduate student Jeff Nichols and then substantially extended by Hoefer in Bandaru’s lab.

“We first realized that defective CNTs could be used for energy storage when we were investigating their use as electrodes for chemical sensors,” Hoefer said. “During our initial tests we noticed that we were able to create charged defects that could be used to increase CNT charge storage capabilities.”

Specifically, defects on nanotubes create additional charge sites enhancing the stored charge. The researchers have also discovered methods which could increase or decrease the charge associated with the defects by bombarding the CNTs with argon or hydrogen.

“It is important to control this process carefully as too many defects can deteriorate the electrical conductivity, which is the reason for the use of CNTs in the first place. Good conductivity helps in efficient charge transport and increases the power density of these devices,” Bandaru added.

“At the very outset, it is interesting that CNTs, which are nominally considered perfect, could be useful with so many incorporated defects,” he added.

The researchers think that the energy density and power density obtained through their work could be practically higher than existing capacitor configurations which suffer from problems associated with poor reliability, cost, and poor electrical characteristics.

Bandaru and Hoefer hope that their research could have major implications in the area of energy storage, a pertinent topic of today. “We hope that our research will spark future interest in utilizing CNTs as electrodes in charge storage devices with greater energy and power densities,” Hoefer said.

While more research still needs to be done to figure out potential applications from this discovery, the engineers suggest that this research could lead to wide variety of commercial applications, and hope that more scientists and engineers will be compelled to work in this area, Bandaru said.