Tsinghua University (Beijing, CN) inventors Fei Wei, Yao Wang, Guohua Luo, Hao Yu, Zhifei Li, Weizhong Qian, Zhanwen Wang and Yong Jin reveal a method for continuous production of carbon nanotubes in a nano-agglomerate fluidized bed reactor in U.S. Patent Application 20090286675.  The carbon nanotubes produced have a purity of greater than 96% and a yield of greater than >26 g/per gram of catalyst.  By properly adjusting the reaction rate, operating conditions and fluidized-bed structure, the reactor bed is kept in an agglomerate fluidization state, so as to realize the continuous mass production of carbon nanotubes with a high degree of crystallization, high purity, and high yield. 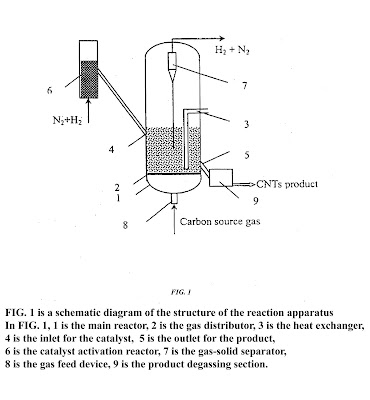 The Tsinghua method comprises the following steps: loading transition metal compounds on a support, obtaining supported nanosized metal catalysts by reducing or dissociating, catalytically decomposing a carbon-source gas, and growing carbon nanotubes on the catalyst support by chemical vapor deposition of carbon atoms. The carbon nanotubes are 4 to 100 nm in diameter and 0.5 to 1000 microns in length. The carbon nanotube agglomerates, ranged between 1 to about 1000 microns (mu.m), are smoothly fluidized under 0.005 to 2 m/s superficial gas velocity and 20-800 kg/cubic meter bed density in the fluidized-bed reactor. The apparatus is simple and easy to operate, has a high reaction rate. During the production of the nanosized carbon materials, the distribution of temperature and concentrations in the fluidized bed are uniform, and there is neither local overheating nor coagulation.

FIG. 3 is a Transmission Electron Microscope (TEM) photograph from the patent application of the carbon nanotubes produced using the Tsinghua University method and reaction apparatus. 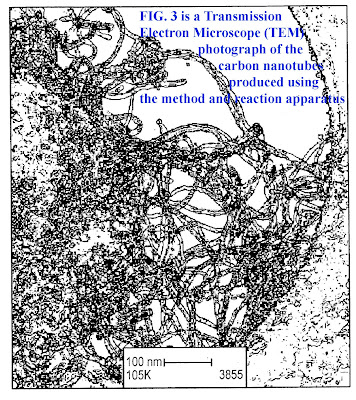 FIG. 5 (from Patent Application 20090286675) shows the growth mechanism of carbon nanotube agglomerates with catalysts. Transition metal nanoparticles are formed from a transition metal oxide selected from the group consisting of Fe--Cu oxide, Ni--Cu oxide, Co--Mn oxide or Ni oxide; a solid support is selected from superfine glass beads, SiO2, Al2O3 or carbon nanotubes, wherein the metal nanoparticles and the support are combined to form  catalyst nano agglomerates; and carbon nanotubes are deposited on the catalyst nano-agglomerates in a fluidized-bed reactor. 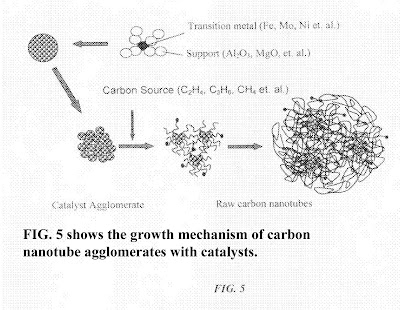