Atomic Energy Council - Institute of Nuclear Energy Research (Taoyuan, TW) scientists have fabricated a longlife Dye-Sensitized Solar Cell using nanoparticles of InN(indium nitride)/TiO2 (titanium oxide) to create a novel photosensitized electrode. It is comprised  of an indium tin oxide (ITO) substrate, a TiO2 film and an InN photosensitive layer.   The photosensitized electrode can be fabricated at a low cost and with long lifetime in a solar cell device with enhanced absorbing ability.  The solar cell is an InN/TiO2 photosensitized electrode, where a lifetime issue of the dye for a Dye-Sensitized Solar Cell (DSSC) is solved; an optical absorption efficiency is enhanced; a production procedure is simplified; and a production cost is reduced to 1/5 to 1/10 of current manufacturing processes, say inventors Ming-Chang Lin, Yen-Chang Tzeng, Shan-Ming Lan, Yuan-Pern Lee, Wei-Guang Diau, Tsong-Yang Wei, Jyh-Perng Chiu, Li-Fu Lin, Der-Jhy Shieh and Ming-Chao Kuo in U.S. Patent 7,622,397.


Step (a): A substrate coated with a TiO2 film is placed into a reaction chamber  where the TiO2 film is coated on the substrate through a CVD or a PCD.

Step (c) The substrate is then illuminated with an ultraviolet (UV) light, where the UV light is obtained from a continuous UV lamp, an excimer laser, a semiconductor laser, a gas laser, a solid-state laser, a liquid laser, a chemical laser or a free-electron laser, and where the TiO2 film bears a temperature between 600.degree. C. (Celsius degree) and 900.degree. C. 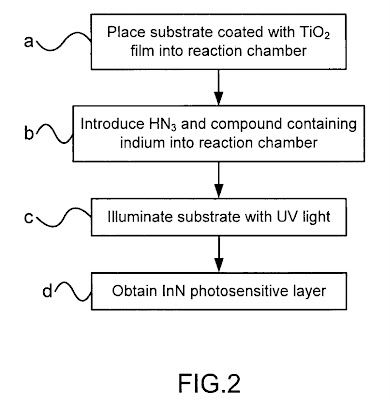