Boeing has been awarded a U.S. Navy contract valued at up to $163 million, with an initial task order of $6.9 million, to develop the Free Electron Laser (FEL) weapon system, which will transform naval warfare in the next decade by providing an ultra-precise, speed-of-light capability and unlimited magazine depth to defend ships against new, challenging threats, such as hyper-velocity cruise missiles. 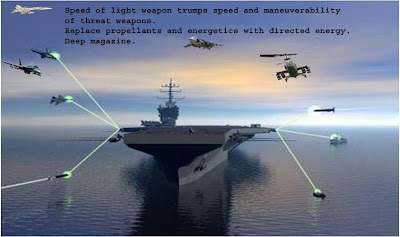 Under the task order, awarded in April 2009 by the Office of Naval Research, Boeing will complete the preliminary design of the electric-powered Free Electron Laser (FEL), the key step toward building a FEL  prototype for realistic tests at sea.  FELs are capable of achieving the megawatt power the Navy requires for ship defense. They operate by passing a beam of high-energy electrons through a series of powerful magnetic fields, causing the intense emission of laser light.Boeing 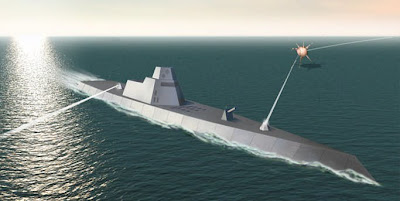 The Directed Energy Systems (DES) unit of Boeing Missile Defense Systems is developing systems to address multiple defense needs and customers.  Among key DES programs are the Advanced Tactical Laser, sponsored by the U.S. Air Force; the High Energy Laser Technology Demonstrator, funded by the U.S. Army; the Free Electron Laser, commissioned by the U.S. Navy; and the Tactical Relay Mirror System being developed for the Air Force and the Office of the Secretary of Defense/Director of Defense Research and Engineering.

The Advanced Tactical Laser (ATL) program equipped a C-130H aircraft with a high-energy chemical laser for engagements against ground targets.  In June 2009, ATL fired its high-power laser for the first time in flight, successfully hitting a target board located on the ground. In August 2009, ATL defeated a ground vehicle target from the air, demonstrating its first air-to-ground, high-power laser engagement of a tactically representative target. The ATL team plans additional tests to further demonstrate the system's military utility. The system is designed to destroy, damage or disable targets with little to no collateral damage. These demonstrations support development of systems that will conduct missions on the battlefield and in urban operations.

Boeing has been awarded a U.S. Army contract valued at approximately $36 million to continue developing a truck-mounted, high-energy laser weapon system that will destroy rockets, artillery shells and mortar rounds.

Under the High Energy Laser Technology Demonstrator (HEL TD) Phase II contract, awarded in August 2008, Boeing will complete the design of, then build, test and evaluate, a rugged beam control system on a Heavy Expanded Mobility Tactical Truck. Boeing also will develop the system-engineering requirements for the entire HEL TD laser weapon system. Boeing successfully completed the preliminary design of the beam control system in the summer of 2008, under the HEL TD Phase I contract it was awarded in 2007.

The objective of the HEL TD program is to demonstrate that a mobile, solid-state laser weapon system can effectively counter rocket, artillery and mortar projectiles. The program will support the transition to a full-fledged Army acquisition program.

The Personnel Halting and Stimulation Response (PHaSR) is a rifle-size laser weapon  developed by the Air Force that uses two nonlethal laser wavelengths to deter, prevent, or mitigate an adversary’s effectiveness. 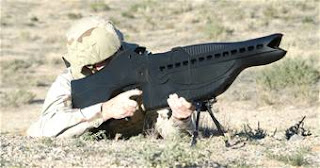 Boeing The laser light generated by this weapon illuminates or “dazzles” aggressors, temporarily impairing individuals and their ability to see the laser source. The weapon was developed at the ScorpWorks, the Air Force Research Laboratory’s in-​​house devel­op­ment team for laser sys­tem pro­to­types. It has existed since 1992.

The Center for Strategic & Budgetary Assessments (CSBA) recently posed  the question: Do advances in solid-state laser (SSL) technology, combined with strategic and organizational factors, point to a high probability that the US could field an operational laser weapon system in the next decade?

What  the Center for Strategic & Budgetary Assessments (CSBA) investigators found:

-Emerging threats to US national security combined with recent advances in SSL technology suggest that laser weapon systems are capable of making unique and important contributions to US military effectiveness;

- Important technical/engineering, institutional, temporal, and fiscal barriers must be overcome for that to happen;

- Past experience with disruptive weapon systems argues that, at the present rate, non-technical barriers will be difficult to overcome soon enough for laser weapons to achieve IOC in the next decade—with potentially serious consequences for US national security;

-Overcoming these barriers requires the convergence of warfighter demand and significant fiscal and institutional commitment by DoD, industry, and Congress;

-The proliferation of guided rocket/artillery/mortar/missile (G-RAMM) provides the most compelling near-term stimulus for laser systems.