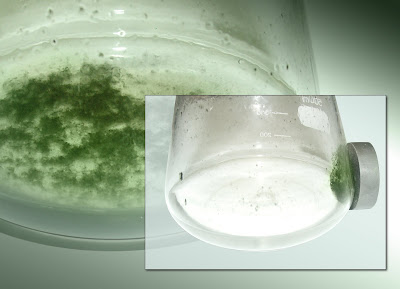 A method developed by Siemens researchers may make it easier to better exploit sources of raw material for biogas plants. Algae can be harvested very easily using the researchers’ method. The researchers were able to demonstrate in the lab that particular fast-growing species of algae accumulate on magnetic particles. The algae, which are used for CO2-neutral combustion, can be harvested as easily as a magnet collects iron nails.

Algae are a valuable source of raw material. For millions of years throughout the history of the world, they have transformed CO2 into valuable organic molecules. Some species specialized in the production of fatty acids and lipids. Their fossilized remains from the dawn of time are the foundation for the petroleum and natural gas extracted today. Algae continue to harbor enormous potential today as suppliers of biomass, biogas, or biodiesel. They are also easy to cultivate. They don’t need anything more than CO2 and water, and preferably wastewater at that because of thenutrients it contains.

Despite all of the advantages, there is one disadvantage: Harvesting the algae has so proved to be particularly difficult. A liter of water contains only a few grams of algae. To harvest it, the water must be drained and filtered in a complex and time consuming process. The new method developed by the Siemens researchers changes all of that. They mix the algae with magnetite. The algae enclose these iron oxide particles, which are only a few micrometers in size – much smaller than the diameter of a human hair. The resulting mixture of algae and magnetite can then be easily extracted using a magnet without having to drain the water.

The new technology offers numerous advantages. Because the water loss is smaller than before, algae also become an interesting source of raw material for drier areas. The algae can also be more efficiently cultivated. The amount of algae harvested can be determined by varying the amount of magnetite used. A certain amount of algae is left behind as the starting stock for the next population.

So far the new technology has only been used on the laboratory scale, but the Siemens researchers are confident that it will also work on a larger scale. The next step would be the construction of a pilot plant for conducting further tests of the scalability and efficiency of the method.