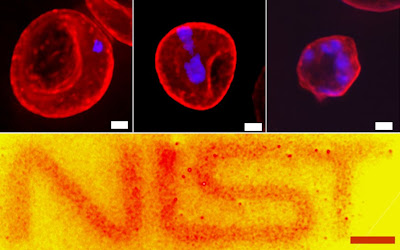 The photo shows human red blood cells, in which membrane proteins are targeted and labeled with quantum dots, reveal the clustering behavior of the proteins. The number of purple features, which indicate the nuclei of malaria parasites, increases as malaria development progresses. The NIST logo at bottom was made by a photo lithography technique on a thin film of quantum dots, taking advantage of the property that clustered dots exhibit increased photoluminescence. (White bars: 1 ¼m; red: 10 ¼m.)

A joint research team, working at the National Institute of Standards and Technology (NIST) and the National Institute of Allergy and Infectious Diseases (NIAID), has discovered a method of using nanoparticles to illuminate the cellular interior to reveal these slow processes. Nanoparticles, thousands of times smaller than a cell, have a variety of applications. One type of nanoparticle called a quantum dot glows when exposed to light. These semiconductor particles can be coated with organic materials, which are tailored to be attracted to specific proteins within the part of a cell a scientist wishes to examine.

“Quantum dots last longer than many organic dyes and fluorescent proteins that we previously used to illuminate the interiors of cells,” says biophysicist Jeeseong Hwang, who led the team on the NIST side. “They also have the advantage of monitoring changes in cellular processes while most high-resolution techniques like electron microscopy only provide images of cellular processes frozen at one moment. Using quantum dots, we can now elucidate cellular processes involving the dynamic motions of proteins.”

For their recent study, the team focused primarily on characterizing quantum dot properties, contrasting them with other imaging techniques. In one example, they employed quantum dots designed to target a specific type of human red blood cell protein that forms part of a network structure in the cell’s inner membrane. When these proteins cluster together in a healthy cell, the network provides mechanical flexibility to the cell so it can squeeze through narrow capillaries and other tight spaces. But when the cell gets infected with the malaria parasite, the structure of the network protein changes.

“Because the clustering mechanism is not well understood, we decided to examine it with the dots,” says NIAID biophysist Fuyuki Tokumasu. “We thought if we could develop a technique to visualize the clustering, we could learn something about the progress of a malaria infection, which has several distinct developmental stages.”

The team’s efforts revealed that as the membrane proteins bunch up, the quantum dots attached to them are induced to cluster themselves and glow more brightly, permitting scientists to watch as the clustering of proteins progresses. More broadly, the team found that when quantum dots attach themselves to other nanomaterials, the dots’ optical properties change in unique ways in each case. They also found evidence that quantum dot optical properties are altered as the nanoscale environment changes, offering greater possibility of using quantum dots to sense the local biochemical environment inside cells.

“Some concerns remain over toxicity and other properties,” Hwang says, “but altogether, our findings indicate that quantum dots could be a valuable tool to investigate dynamic cellular processes.”