Electron beam freeform fabrication (EBF³) is a cross-cutting technology for producing structural metal parts. Developed by researchers at NASA's Langley Research Center as a replacement for forgings, this manufacturing process offers significant reductions in cost and lead time. The promise of this technology extends far beyond its applicability to low-cost manufacturing and aircraft structural designs. EBF³ could provide a way for astronauts to fabricate structural spare parts and new tools aboard the International Space Station or on the surface of the moon or Mars, according to Karen Taminger, materials research engineer, NASA's Langley Research Center.  EBF³ can't make food like the replicator featured in the TV series Star Trek but it can use computer aided design create a variety of solid objects layer by layer using a deposition process powered lasers and could be used to make spare parts in space. 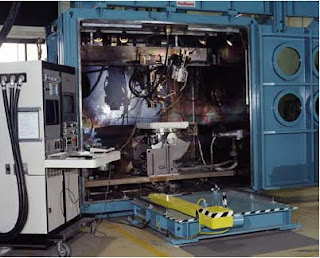 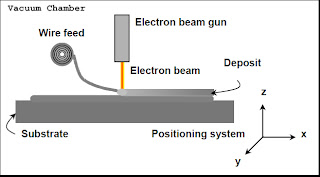 The ground-based system (see above photo and schematic) is a commercially-available electron beam welder that has been adapted for performing EBF3 process development. This system includes a 42 kW, 60-kV accelerating voltage electron beam gun, a vacuum system, a positioning system, and dual wire feeders capable of independent, simultaneous operation. The two wire feeders may be loaded with either a fine and a coarse wire diameter for different feature definition, or two different alloys to produce components with compositional gradients. Positioning is programmable through six axes of motion (X, Z and tilt on the moving electron beam gun, and Y, tilt and rotate on the positioning table). This electron beam system requires a vacuum on the order of 5x10-5 torr and is housed in a vacuum chamber measuring 2.5 m by 2 m by 2.7 m (100 in. by 78 in. by 108 in.). The EBF3 process offers promise for fabrication of a variety of parts. 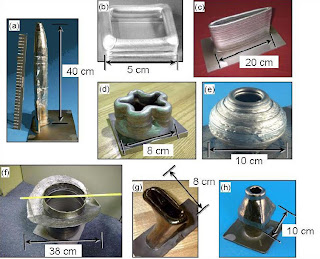 EBF³ uses a focused electron beam in a vacuum environment to create a molten pool on a metallic substrate. This layer-additive process enables fabrication of parts directly from CAD drawings. Metal can be placed only where it is needed and the material chemistry and properties can be tailored throughout a single-piece structure, leading to new design methods for integrated sensors, tailored structures, and complex, curvilinear stiffeners. The parts can be designed to support loads and perform other functions such as aeroelastic tailoring or acoustic dampening. The EBF3 process has been demonstrated on aluminum, titanium, and nickel-based alloys of interest for aerospace structural applications; ferrous-based alloys are also planned.

Researchers at NASA Langley Research Center have developed the electron beam freeform fabrication (EBF3) process to produce unitized structures from high reflectance aerospace alloys such as aluminium and titanium. Near-term applications of the EBF3 process are most likely to be implemented for cost reduction and lead time reduction thru addition of details onto simplified preforms (casting or forging). This is particularly attractive for components with protruding details that would require a significantly large volume of material to be machined away from an oversized forging. Future far-term applications promise improved structural efficiency through reduced weight and improved performance by exploiting the layer-additive nature of the EBF3 process to fabricate tailored unitized structures with functionally graded microstructures.

EBF3 is a new layer additive process with high potential for use in numerous structural metallic applications. EBF3 offers the potential for cost and lead time reductions in production of parts and performance improvements through optimized alloy chemistries and microstructures. Microstructures and mechanical properties obtained in aluminium and titanium alloys have demonstrated the potential for achieving a wide microstructural range with properties comparable to those of wrought product forms. EBF3 offers viable solutions to issues of deposition rate, process efficiency, and material compatibility for insertion into the production environment. Although further process development and understanding is required, no barriers are evident to prevent the maturation of EBF3 into a competitive commercial process.

Solid freeform fabrication (SFF) encompasses a class of processes that can be used to design and construct parts using a layer-additive approach. SFF processes are an outgrowth of rapid prototyping processes such as stereolithography for plastics and welding repair techniques employing laser, electron beam, or arc welding for repairing metal seal knife edges, turbine blade tips, or tooling dies. Current development efforts are expanding these repair techniques and applying principles from computer-aided design (CAD) and manufacturing as well as from rapid prototyping for wider applications. These development efforts are resulting in the production of a new class of SFF layer-additive processes to build structural metallic parts directly from CAD data rather than the traditional material removal approach. 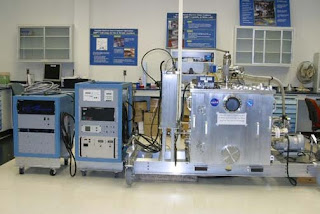 A second EBF3 system is portable and consists of a small vacuum chamber, fixed low power electron beam gun, four axis motion control system on the table (X, Y, Z and rotation), single wire feeder, and  data acquisition and control system. This second EBF3 system is housed within a 1 m (38 in.) cubed vacuum chamber with the ability to fabricate a component 30 cm by 30 cm by 15 cm (12 in. by 12 in. by 6 in.) in size. This system is designed for portability so that it can be used in a variety of different locations. It has been successfully demonstrated in flight on an aircraft as well as on the ground in our laboratory. This system is well-suited for fabrication of smaller parts with intricate details due to the finer wire diameters that can be fed as well as higher precision on the positioning system.
on November 12, 2009