Nanotek Instruments, Inc. (Dayton, OH) researchers Lulu Song, Aruna Zhamu, Jiusheng Guo and Bor Z. Jang  have successfully developed a new and novel class of meso-porous nanocomposites that are superior supercapacitor electrode materials. A supercapacitor can make use of this material in one or both of the electrodes. Nano graphene platelet (NGP)-based nanocomposites exhibit great capacitance and electrical conductivity. Other desirable features of NGPs include chemical stability and low mass density. They are also of lower costs compared with carbon nano-tube-based materials. Both NGPs and NGP-based nanocomposites can be mass produced cost-effectively according to U.S. Patent 7,623,340. 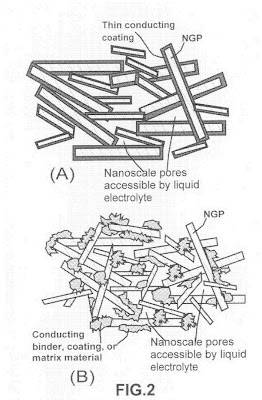 The preparation and characteristics of meso-porous NGP nanocomposites are  also described: In Route 1, as shown in FIG. 3, a meso-porous nanocomposite can be obtained by freeze-drying, which entails first dispersing NGPs in a polymer-solvent solution to form a NGP suspension. This suspension is then formed into a desired shape with the solution being rapidly frozen (e.g., using liquid nitrogen as a cooling medium). The frozen "solid" is subjected to a vacuum- or pumping-assisted procedure to facilitate sublimation of the solvent, leaving behind NGPs, the solid polymer, and a large amount of pores. If the polymer is a conducting polymer, no further chemical treatment is needed (except for conversion of a precursor polymer to a conductive polymer), and the resulting material is a good meso-porous nanocomposite that can be shaped into a supercapacitor electrode. Conducting (conjugate-chain) polymers, such as polyaniline, and their soluble precursor polymers are good choices for use in the present invention. Alternatively, a non-conducting material can be converted to become a polymeric carbon by pyrolization, which involves heating to disintegrate the polymer and removing most of the non-carbon elements from the material. The non-carbon elements, forming molecules like carbon dioxide, escape from the polymer, creating minute pores. 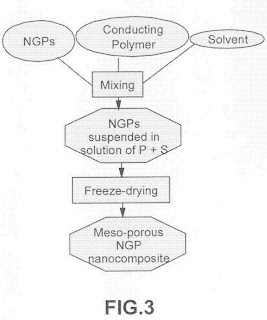 Electrochemical capacitors (ECs), also known as ultracapacitors or supercapacitors, are being considered for uses in hybrid electric vehicles (EVs) where they can supplement a battery used in an electric car to provide bursts of power needed for rapid acceleration, the biggest technical hurdle to making battery-powered cars commercially viable. A battery would still be used for cruising, but capacitors (with their ability to release energy much more quickly than batteries) would kick in whenever the car needs to accelerate for merging, passing, emergency maneuvers, and hill climbing. The EC must also store sufficient energy to provide an acceptable driving range. To be cost- and weight-effective compared to additional battery capacity they must combine adequate specific energy and specific power with long cycle life, and meet cost targets as well. Specifically, they must store about 400 Wh of energy, be able to deliver about 40 kW of power for about 10 seconds, and provide high cycle-life (>100,000 cycles).

ECs are also gaining acceptance in the electronics industry as system designers become familiar with their attributes and benefits. ECs were originally developed to provide large bursts of driving energy for orbital lasers. In complementary metal oxide semiconductor (CMOS) memory backup applications, for instance, a one-Farad EC having a volume of only one-half cubic inch can replace nickel-cadmium or lithium batteries and provide backup power for months. For a given applied voltage, the stored energy in an EC associated with a given charge is half that storable in a corresponding battery system for passage of the same charge. Nevertheless, ECs are extremely attractive power sources. Compared with batteries, they require no maintenance, offer much higher cycle-life, require a very simple charging circuit, experience no "memory effect," and are generally much safer. Physical rather than chemical energy storage is the key reason for their safe operation and extraordinarily high cycle-life. Perhaps most importantly, capacitors offer higher power density than batteries.