The Norwegian company Advanced Marine Coatings based in Gamle Fredrikstad specializes in the development of environmentally compatible, heavy-duty anti-corrosion coatings for sea-going vessels is the first company to apply  The “Green Ocean Coating Heavy Duty” coatings which are formulated with Baytubes® carbon nanotubes (CNT) from Bayer MaterialScience. The coating give the ships with them very high abrasion resistance. The coatings also reduce the flow resistance between the ship's hull and the water, thereby enabling a significant reduction in fuel consumption and carbon dioxide (CO2) emissions.

“According to our knowledge, this is the first application of Baytubes® carbon nanotubes in marine coatings”, says Dr. Raul Pires, head of Global Activities for Nanotubes and Nanotechnology Products at Bayer MaterialScience. The coatings are suitable for both new vessels and for subsequent repair and maintenance coatings and reduce fuel consumption by as much as 10%. 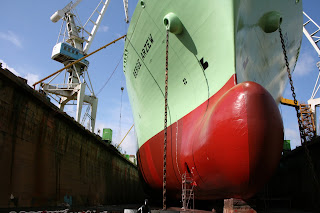 The Green Ocean Coating Heavy Duty systems are two-component epoxy mastic resins coatings with extremely high resistance to water, making them particularly suitable for marine coatings and in particular for the part of the hull below the surface of the water. Thanks to the addition of Baytubes® carbon nanotubes, these have a very smooth surface and thus help to save fuel and reduce carbon dioxide emissions.

Another major advantage is the reduction of maintenance costs. The ban on organic tin compounds for use as antifouling agents to prevent organic growth has necessitated relative frequent cleaning of the coating surface on the ship’s hull to ensure cost-effective transport. “We hope that the smoothness and greater hardness of the coating will provide better durability and will allow us to extend the cleaning cycle. Thanks to the use of Baytubes®, the systems represent both the most ecological and the most economic solution,” says Stein Dietrichson, Managing Director of Advanced Marine Coatings.

The first ship to be coated with this system was the Berge Arzew, an LNG (liquified natural gas) tanker with a capacity of 138,000 cubic meters. Extensive test coatings of a Green Ocean Coating were successfully applied to a surface area of 700 square meters. The VOC-free system (VOC stands for volatile organic compounds) was applied in film thicknesses of up to 400 micrometers. “The results so far are highly promising. The nanotubes evidently make for a very smooth, pore-free surface,” says Dietrichson.

A film shot in spring 2007 at NTNU and SINTEF Marintek in Trondheim, shows the AMC R & D manager, Eng. Paal Skybak,  who explains about nano modified paints and the Green Ocean development program.
The film is focused on the environment with much attention on CO2 emissions and how sleek coatings enable energy savings of up to 10%. The consequences of this on a global basis could be a total reduction in CO2 emissions of more than 70 million tons. This was explained by a Bellona representative, who also said that this will be an important contribution to the effort to improve the global climate by reducing CO2 emissions.
The program may be seen by following this link to: Paint can make ships more environmentally friendly
on November 25, 2009